Dog finally has its day — with new home 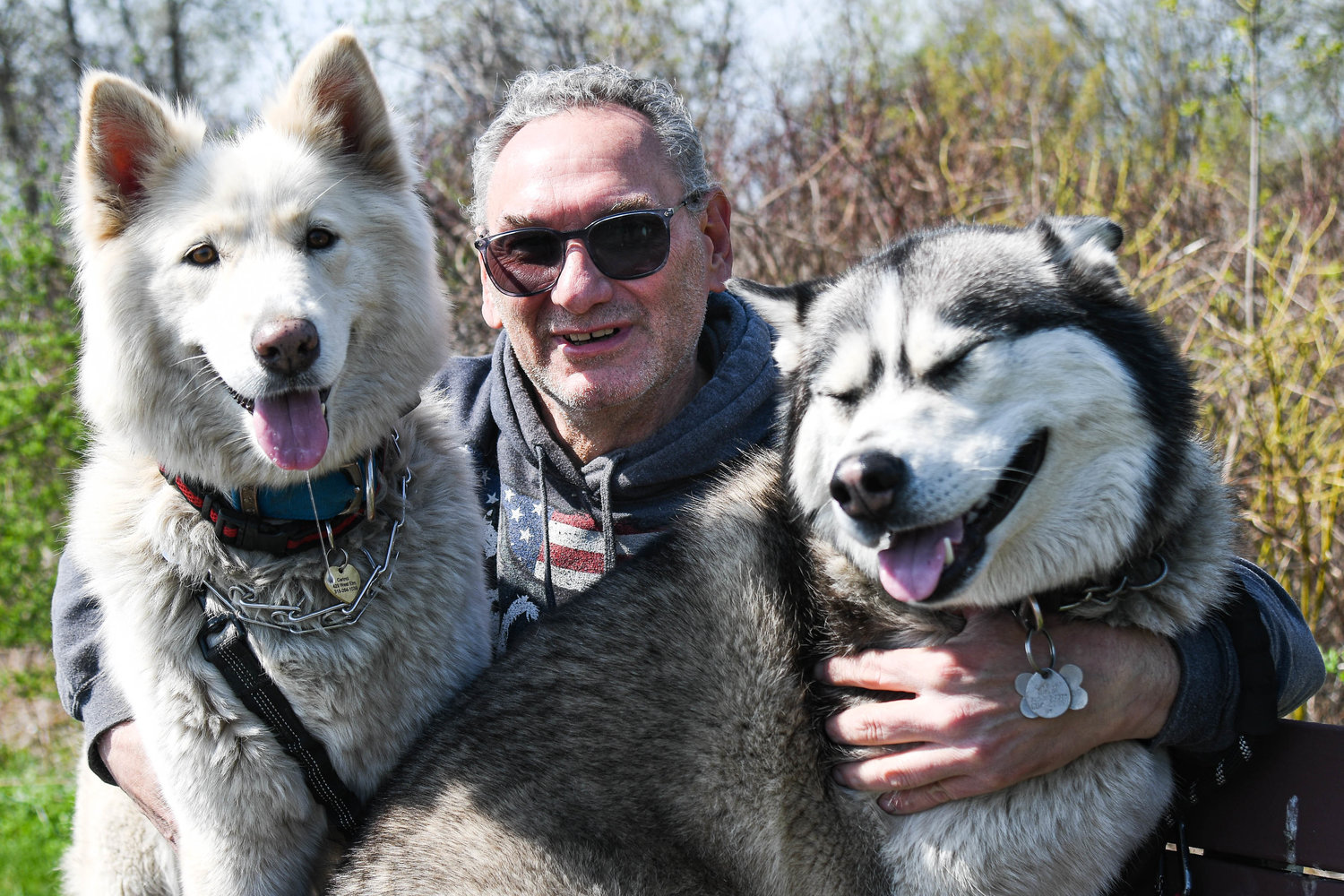 Lewis Carinci with his dogs Sophie, left, and Bello, right at the Phillip A Rayhill Memorial Trail in New Hartford. Sophie was allegedly beaten with a wrench on the New York State Thruway’s Chittenango Rest Stop in March, but has since found a home with her foster family.
(Sentinel photo by Alex Cooper) 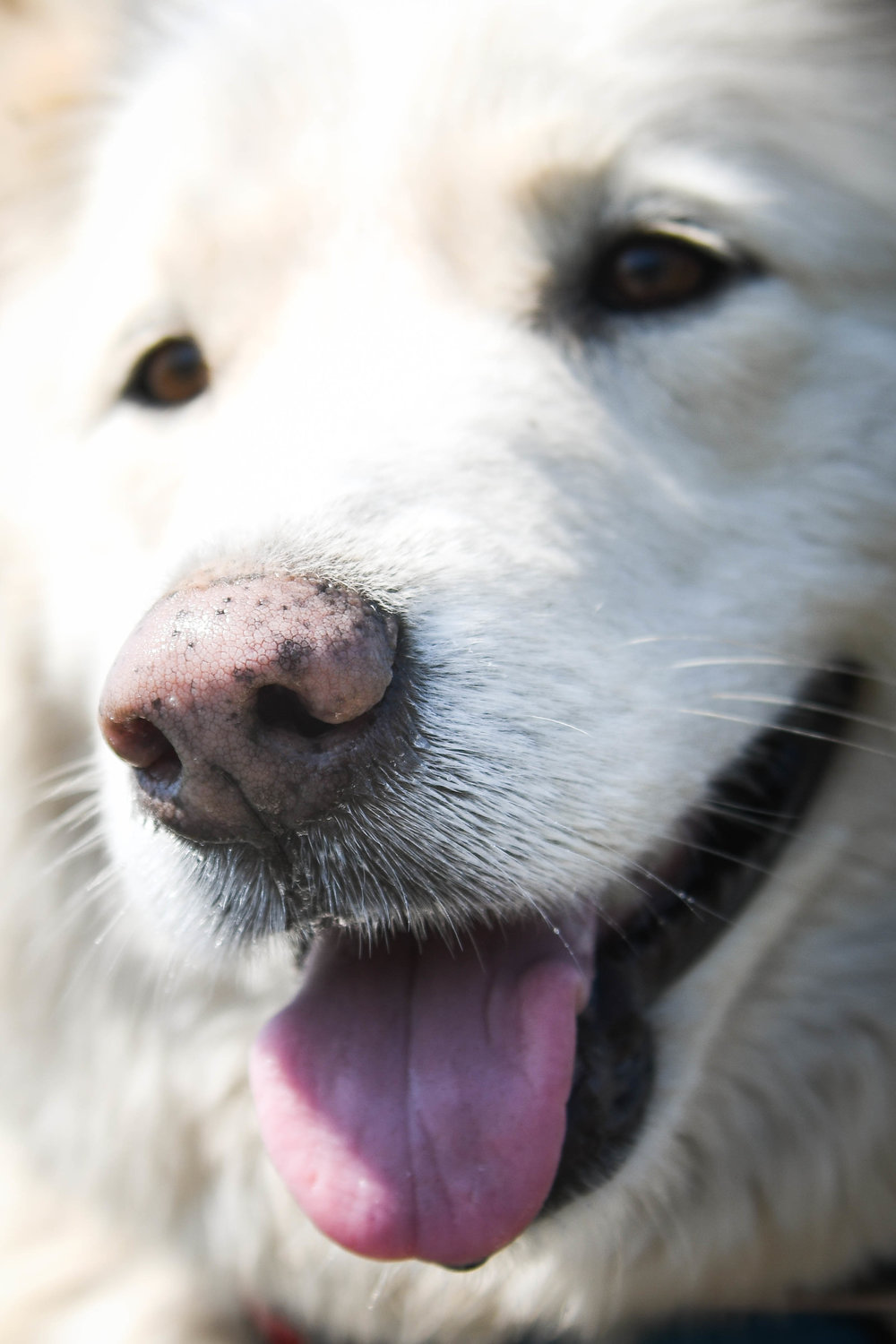 CANASTOTA — “Sopravvissuta,” meaning survivor in Italian, is the name given by the prospective new owner of a young Husky mix who was beaten with a wrench at a Chittenango Rest Stop in March.

“She’s a wonderful, wonderful dog. I just can’t believe that somebody would do what they did to any dog, let alone her. She’s very sweet,” said Lewis Carinci, president of the board at Wanderers’ Rest Humane Association in Canastota. He’s currently fostering the dog, called Sophie for short, in a process to adoption.

Carinci fought back tears telling the story of getting Sophie. “It’s hard to talk about it, it really is.” The dog was separated by authorities from her owner, Terrence Holmes, a 49-year-old truck driver from Tennessee, after he was charged with animal cruelty following the abuse that took place on March 11. The dog was evaluated by a veterinarian for her injuries, which were focused on the top of her head.

Subsequently, the dog came into Wanderers’ Rest possession at the request of town of Sullivan Dog Control Officer Kim Muehlenbein so it could be adopted.

The shelter staff were fearful that Holmes would come and demand the dog’s return, Carinici explained. Out of precaution, he took the dog in as a foster — what he thought would be only temporary. But when he saw her, he knew he was in for the long haul.

“My dog needed a friend, and they got along really well, and I said well I guess I’m going to adopt the dog as soon as I can,” he shared.

Sophie, a Siberian husky mix, was rescued by Lewis Carinci.

Sophie is happy at the Carinci house, he said, and she gets plenty to eat. She goes on long walks with Carinci and his other dog, Bello, which she handles well, but she tends to show aggression when she sees other dogs, he said. She’ll begin behavior training at Howl-N-Bark Training soon. She also enjoys visits with Carinici’s students at OCM BOCES.

Her injuries from the beating are slowly healing. At one point, the swelling on her head was said to be the size of a baseball, according to shelter staff. Carinci said her head is still swollen, but she does not require any medication at this time.

Besides the physical, it appears Sophie also has emotional wounds. “She’s scared of everything,” Carinici said. “Voices raised, hands raised, noises, so I’ve got to take things very slow with her.”

Despite all this, she can’t get enough cuddling, the dog-lover added.

Sophie is due for another vet appointment to check her progress in addition to determining if she’s been spayed. Wanderers’ Rest cannot adopt out any animal that has not been fixed, Carinci explained. “I’ll take care of whatever has to be done. She needs a great home, so that I will definitely supply.”

The next court date for Holmes is set for today, May 10, according to the Madison County District Attorney’s Office. “I want to be in court when the person shows up,” Carinici said.

“It’s time that they use the court system as an obligation to the people in this community and to all animal lovers.” He added, “Slapping the wrist isn’t going to work anymore. I will definitely advocate for minimum three months in jail. We have to get that message out there. Animal abuse cannot be tolerated anymore. It’s putting a lot of strain on a lot of people.”

Carinci said he’s happy he was able to at least take this cruel situation and turn it into a positive.