Renovations to most schools, creation of baseball/softball complex at RFA included 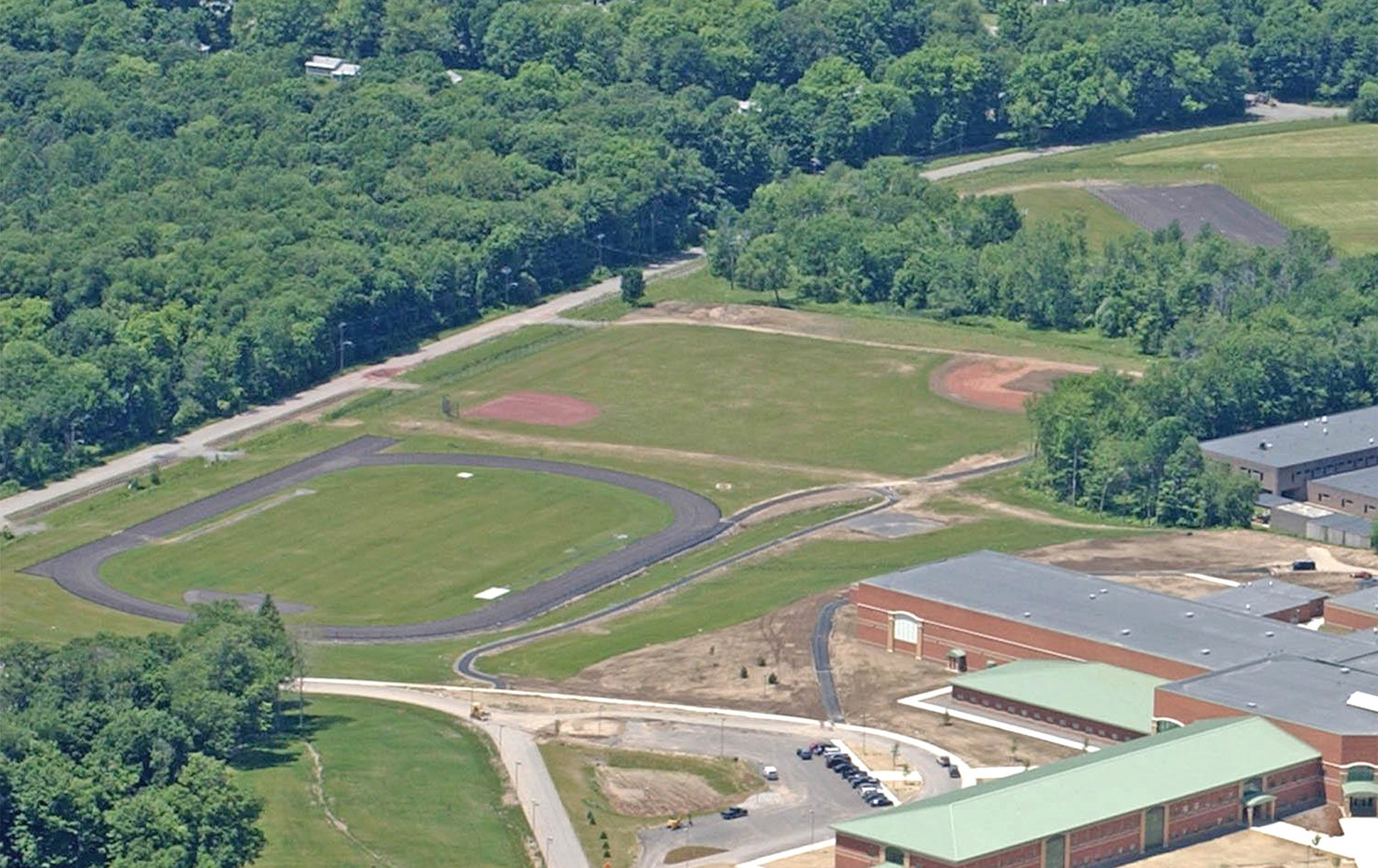 LOOK FROM ABOVE — This aerial photo from 2002 — just before the new school was to open — shows the playing areas used for physical education classes at Rome Free Academy. A $21.6 million capital project would include work to construct a baseball and softball field there for interscholastic competition.
(Sentinel photo by John Clifford)

PLAYING FIELD — Snow covers the grounds below Rome Free Academy on Dart Circle on the Griffiss Business and Technology Park on Thursday. A $21.6 million capital project, which includes interior and exterior work on most district buildings, would also include construction of a baseball/softball complex at the school.
(Sentinel photo by John Clifford) 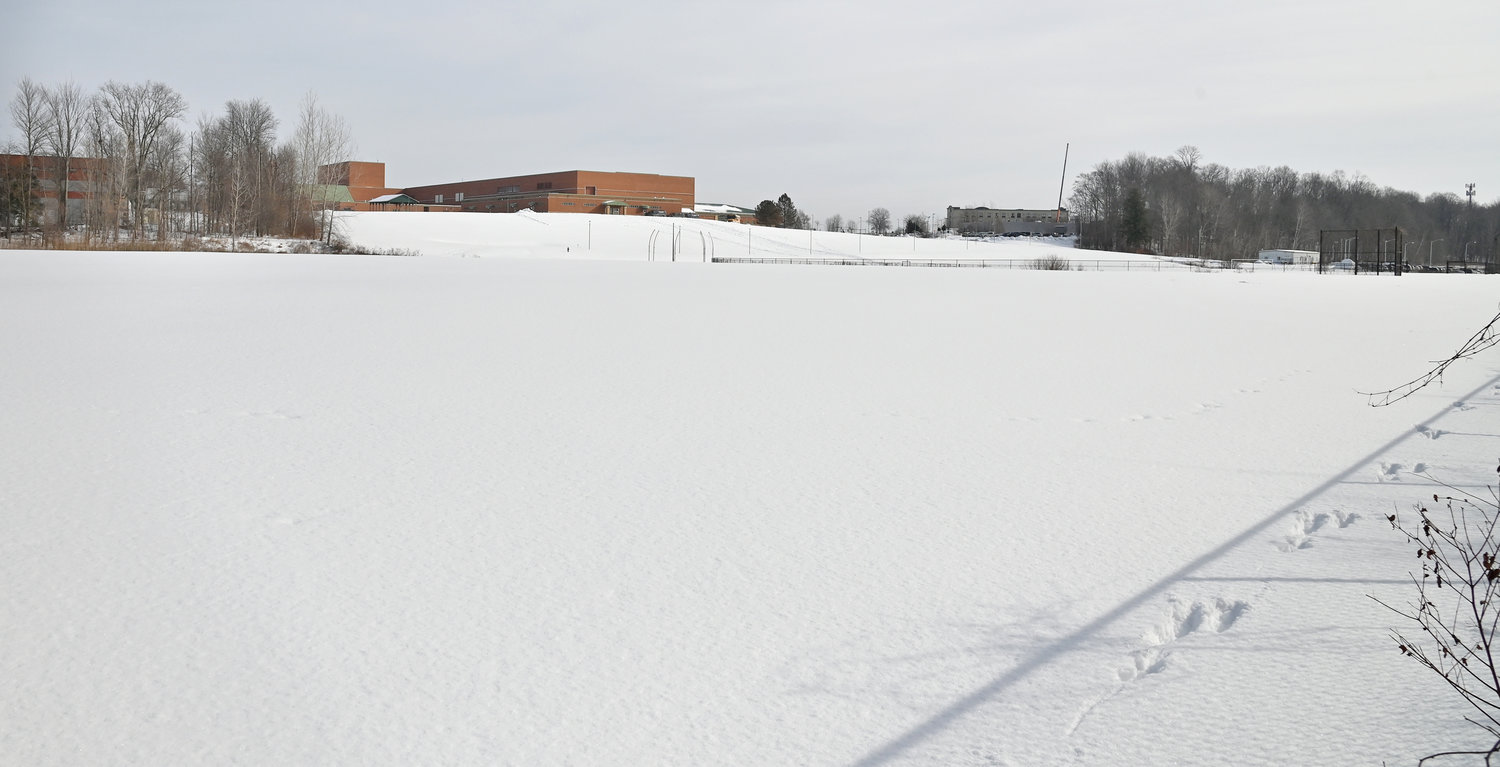 The field in the foreground on the backside of RFA
(Sentinel photo by John Clifford)
Previous Next
Posted Friday, January 28, 2022 6:30 am
Cara Dolan Berry
Staff writer
email

At the regular meeting of the Rome Board of Education Thursday night, members approved companion resolutions to allocate $21,608,018 to a variety of repairs and improvements to district property, including varied projects at Rome Free Academy, Strough Middle School, all six of the district’s elementary school buildings and Clough PK.

Board Clerk, Dr. Karen Fontana, was the only member who stood opposed to the twin resolutions — moved by members Joe Mellace and John Nash and seconded by members Tanya Davis and Lisa Herbowy respectively — involving the proposed capital project, where both passed 7-1.

Fontana respectfully read a prepared statement summing her position that, while she understood that athletics bore great benefit, the teams were all competing such that she considered the expenditures to buy a “want” while the district at once struggles with the challenges of redistricting to address overcrowded classrooms and inequity of services across buildings and faced significant expense to address those challenges, which she considered a “need.”  While other members pointed out that the project includes various repairs and upgrades to the school buildings themselves, Fontana found no dissent in her understanding that majority of the money would be spent addressing the district’s athletic facilities.

The resolution language including a stated plan for financing the project, which included authorizing the use of $3,410,000 from the district’s Capital Reserve, which was approved by district voters on Dec. 18, 2019. The balance of the cost would be collected by levy of tax installments upon all taxable real property in the Rome City School District. Fontana disagreed with use of capital reserve monies and any additional assessments for the stated purposes, while taxpayers await the decision on how to redistrict the Rome schools and what the cost of that decision will be.

The resolution is required to subject to a special election, where all qualified voters have an opportunity to vote on a proposition to move forward with project and fund it as proposed.  That special election is scheduled for March 22, 2022, between 9 a.m. and 8 p.m.

Superintendent of Schools, Peter C. Blake confirmed that there has been no final plan approved as to the specifics of the project.

"Everything is preliminary,” said Blake.

He assured that a presentation would be held to present the proposal in detail, including schematics, prior to the special election asking the voters to approve the project.

Items in the proposed capital plan include:

The construction of a new athletic/
physical education complex at Rome Free Academy high school campus on Dart Circle in the Griffiss Business and Technology Park.

The new athletic/physical education complex would include: Multi-purpose baseball/softball physical education field complex with artificial turf; grandstands; parking; lighting; sidewalks; dugouts; and the resurfacing of and associated enhancements at the tennis courts.

At a recent district facilities meeting, consultants listed the proposed repairs and upgrades for the interior of the RFA building to include the replacement of the fire alarm system, the relief of residual leaking around the building, exterior masonry repairs and attention to all flashing and continuing the replacement of the RFA roof, deemed to be in full failure, where just that portion over and around the pool has been completed.

As a separate resolution on the school board agenda, the district approved a resolution to be the lead agency in the required State Environmental Quality Review Act (SEQRA). As part of this process, the district, the resolution states, has determined the project will have no adverse environmental impacts.

The softball team has played its contests at Kost Field in the girls softball complex behind Mohawk Valley Community College’s Rome campus and the Clough Pre-K School/District Offices. The district’s boys and girls tennis teams have played on the courts at the high school since it opened nearly 20 years ago after having played for generations at Franklyn’s Field.

For years, the district’s baseball team had practiced and played games at the field adjacent to RFA Stadium off of Turin and Sycamore streets. For the past several years, the team has played home games at DeLutis Field at the Griffiss Business and Technology Park.

At a recent district meeting regarding facilities, board member Joe Mellace said the board needs to think about the future of RFA Stadium and the logic in approving a plan for the RFA sports complex that fails to consider the eventual relocation of the football and track facilities to the “new” RFA campus. “There is a lot of nostalgia, and I think that nostalgia has kept us there,” said Mellace at the time about the district’s continued use of RFA Stadium, “but, logistically, it’s still a nightmare.”

Mellace said the move to the RFA high school site on Dart Circle was inevitable.

Board President John Nash said that the RFA baseball team hadn’t been able to use the fields at RFA Stadium of late and asked Superintendent Peter C. Blake – what was his vision for the future of RFA Stadium? Blake’s response that he sees it ultimately being used for junior varsity and modified sports revealed inherently that he concurs with Mellace that a transition to the RFA sports complex was inevitable.

Since the August flooding of Staley Elementary School, which took the facility offline for the 2021-22 school year, the district has grappled with redistricting students as students from Staley were dispersed across the district’s other buildings, leading to the overcrowding of some buildings, according to district officials.

-Rome Board of Education approves resignation of member Ferretti - https://romesentinel.com/stories/board-of-education-approves-resignation-of-member-ferretti,128387

The Believe 271 Foundation will hold its charity golf tournament at the Skenandoa Golf Course in Clinton on July 31.