BAR DOWN — Oriskany’s Madeline Denison, middle, watches her shot go over Sackets Harbor goalie Olivia Derouin in overtime during Tuesday’s Section III Class D opening round game in Oriskany. Denison scored two goals and had an assist for the Redskins in their 4-3 overtime win.
(Sentinel photo by Kenny Kudrewicz) 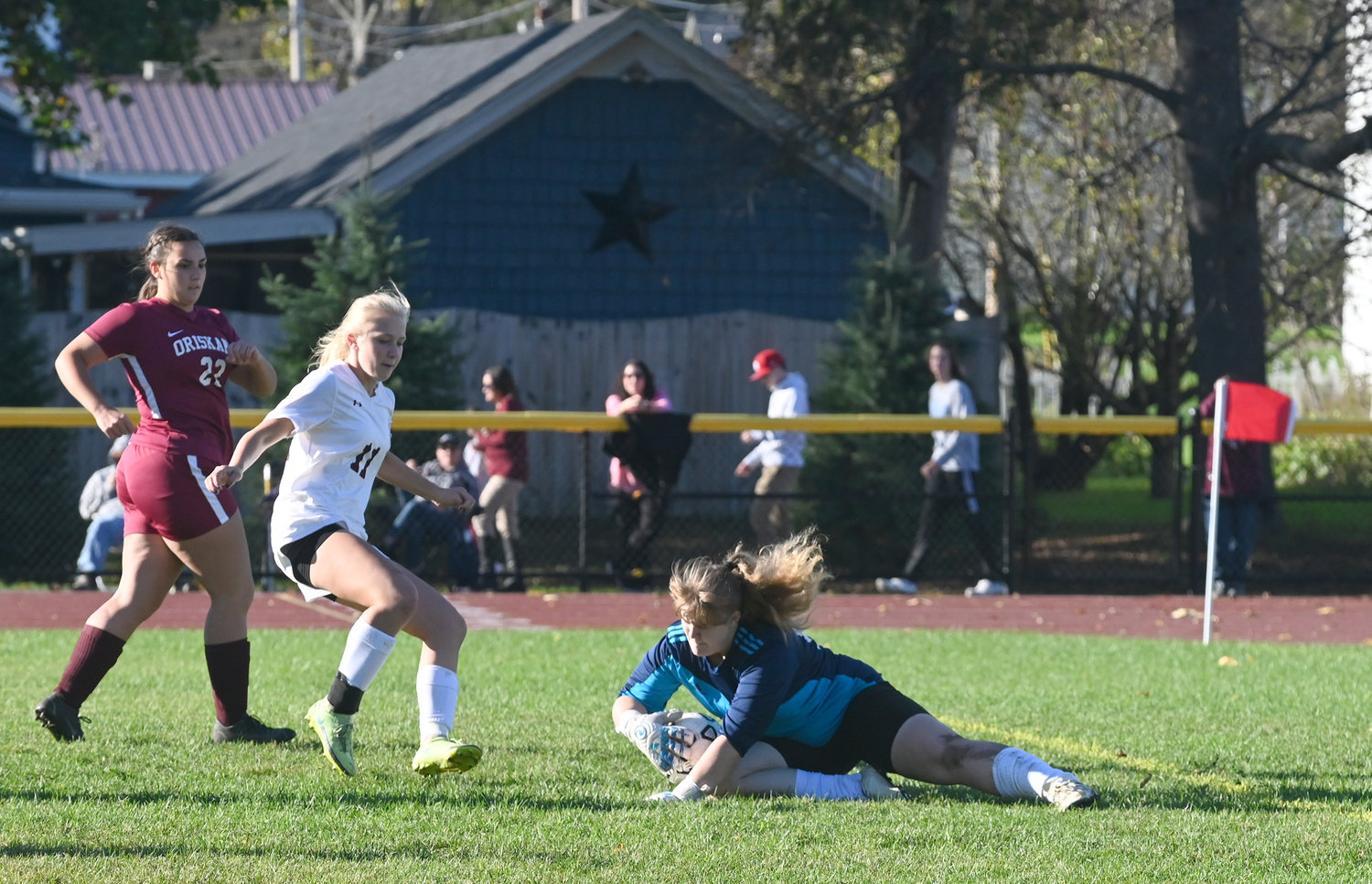 COVERING THE BALL — Oriskany goalie Kaylee Burnop covers up the ball as Sackets Harbor’s Peyton Britton, middle, runs toward her with Oriskany’s Janae Reid on defense during Tuesday’s Section III Class D opening round game in Oriskany. Burnop made 12 saves for the Redskins in their 4-3 overtime win.
(Sentinel photo by Kenny Kudrewicz) 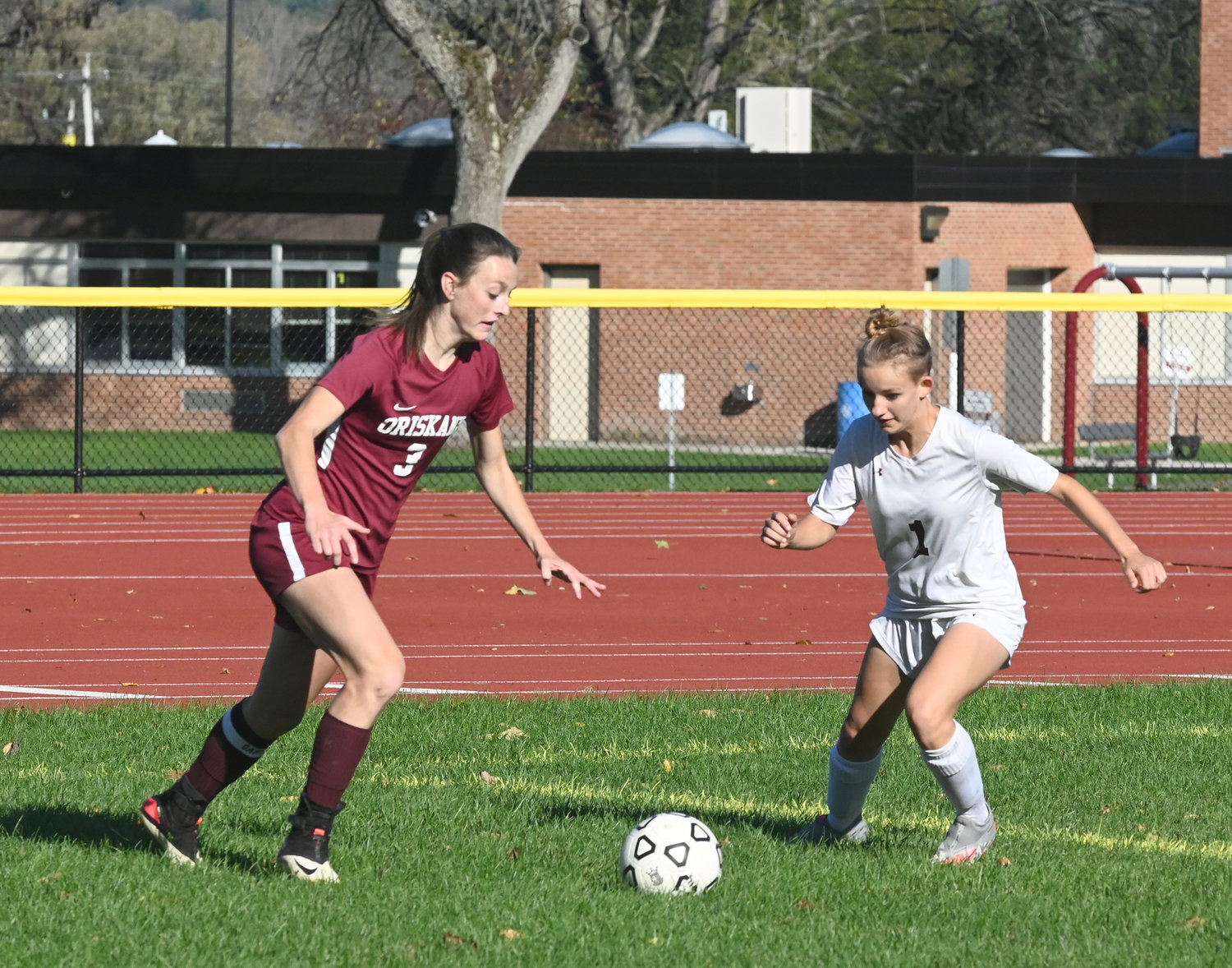 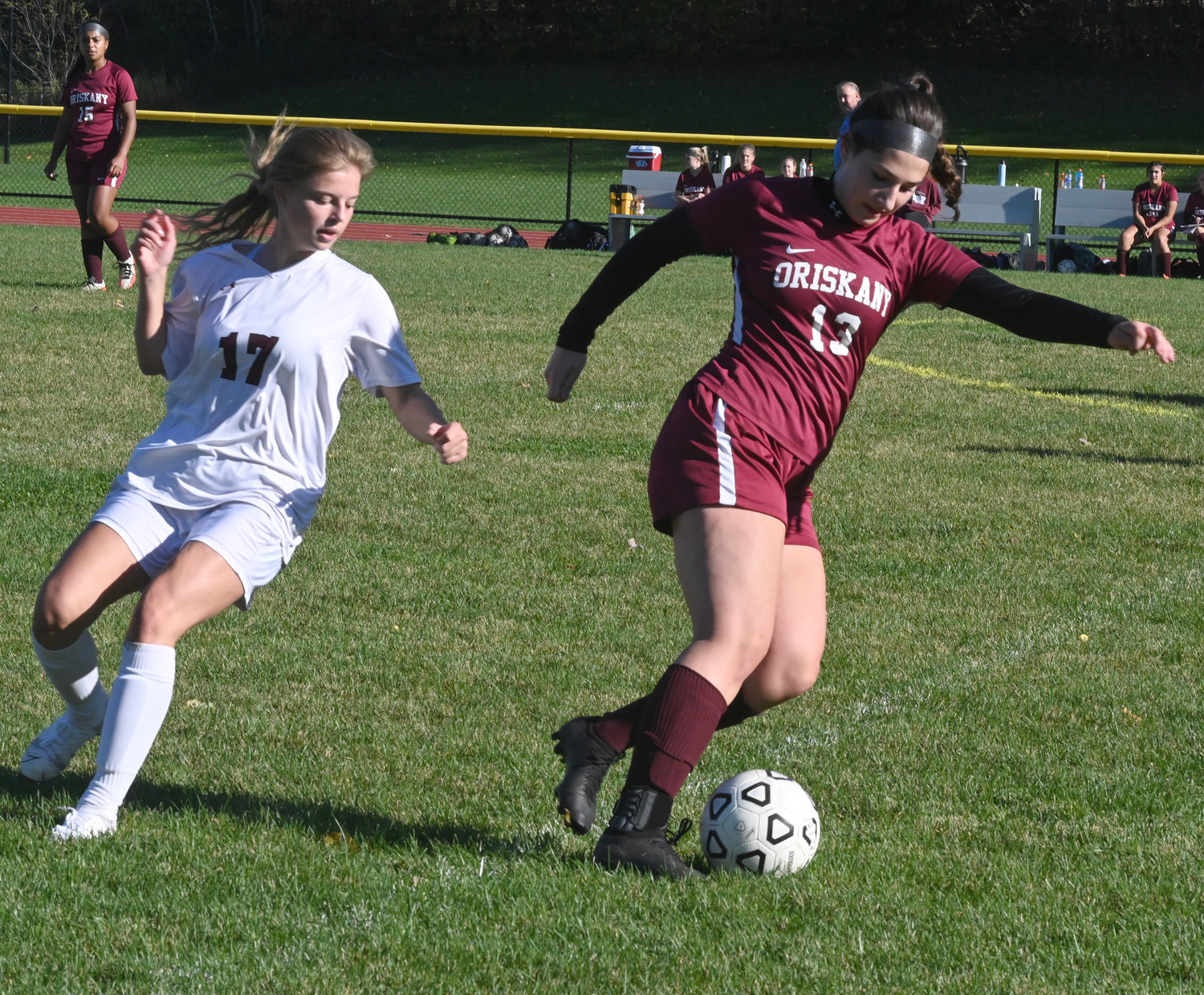 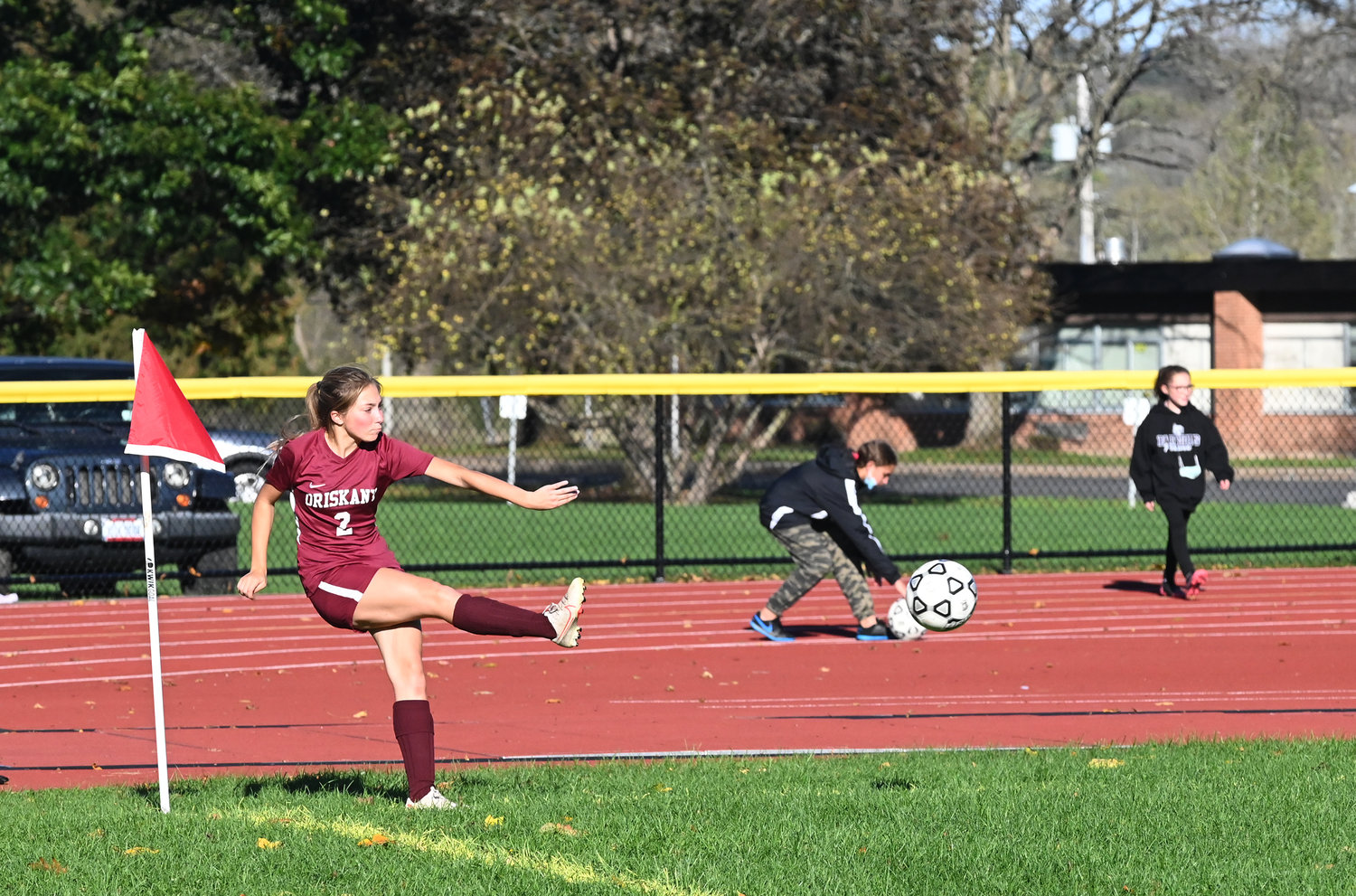 “We needed everything we could get,” Denison said. “We had to dig deep. We were in overtime and we knew we didn’t want to go to penalty kicks. We knew we needed to get the ball in the goal.”

Her second goal of the game came with six minutes left in overtime and the two teams tied at 2-2. She worked her way past two Sackets Harbor defenders and launched a shot from about 30 yards away that hit the cross bar and came down in the goal after Patriots goalie Olivia Derouin made a jumping attempt to make the save.

“It’s exciting anytime you can get into sectionals,” Oriskany head coach Jeff Sergot said. “For us, it’s been a while since we’ve been in sectionals. For these girls, it was something a little bit more. The fact that we pushed through, even though we didn’t play our best in the first half but I attribute that to a great Sackets Harbor team. They played really well against some of our top scorers.”

When Sergot saw Denison take the long-distance shot, he said he had flashbacks to last week when she did the same thing against Herkimer.

“That shot actually put us into sectionals,” Sergot said. “It was such a great shot and she is such an intelligent player. But she can’t do it by herself. She’s getting help from her midfielders, and our defense and goalie are playing great.”

That goal gave the Redskins a 3-2 lead. Oriskany was able to add another goal in the overtime frame, coming off the foot of Brooke Matys. She snuck a shot past Derouin off of a corner kick taken by Denison with 1:58 to go in overtime.

Sackets Harbor cut into the lead with 30 seconds left in the game after Abby Flint was awarded a penalty kick.

The two teams traded field position throughout a majority of the first half, but with 14:36 to go in the opening 40 minutes, Oriskany freshman Addison Fabbio found the back of the net to give the Redskins a 1-0 lead.

Sackets Harbor, which finished the season at 5-10, answered back.

Freshman Peyton Britton got one past Oriskany junior goalie Kaylee Burnop to tie the game at 1-1 with 3:02 remaining in the first half.

Burnop finished the game with 15 saves, while Derouin had 11. The two teams went into halftime tied at 1-1.

In the ninth minute of the second half, Denison had a chance to break the tie after she beat Derouin one-on-one, but she pulled the shot right. But she had redemption two minutes later.

Denison beat the Patriot defense and sent a shot on goal that hit the cross bar and went in to give the Redskins a 2-1 lead.

“To sneak a couple in early was good for our confidence,” Sergot said. “The resiliency of these girls, they really wanted it and it’s a long time coming for them.”

Just a minute later, Britton tied the game again for Sackets Harbor when she scored off of a cross from Lauren Sholett.

Oriskany, which improved to 10-6, advances to the quarterfinals and will travel to fourth-seeded Lyme on Thursday at 3 p.m. at Lyme.