State Department of Environmental Conservation Commissioner Basil Seggos is taking time away from the DEC to provide humanitarian aid in Ukraine. 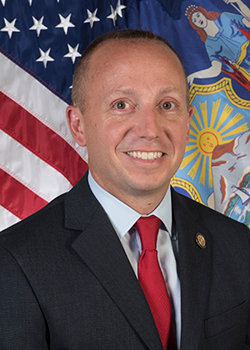 ALBANY  — State Department of Environmental Conservation Commissioner Basil Seggos is taking time away from the DEC to provide humanitarian aid in Ukraine.

“We all must do our part to keep Ukrainians safe during this brutal war, and support democracy wherever it is imperiled,” he tweeted.

The Russian invasion of Ukraine, which started in February, passed the 200-day mark last week. Russian President Vladimir Putin announced the mobilization of up to 300,000 reservists on Wednesday, a move to escalate the war that sparked protests across the country, according to The Associated Press.

The need for aid in Ukraine is continuing to grow “rapidly,” according to the United Nations Office for the Coordination of Humanitarian Affairs — as of the office’s Sept. 16 report, around 17.7 million Ukrainians needed humanitarian aid.

More than 12,000 civilian casualties were reported in Ukraine between February and the end of July, though OCHA states that the real casualty count is “likely much higher.”

Seggos’ trip to Ukraine isn’t affiliated with the DEC, and it’s the second time this month that he’s publicly contributed his personal time to help Ukrainians as the country’s military forces fight against the months-long Russian invasion.

Seggos tweeted earlier this month that he was working with the nonprofit Ukraine Friends “on (his) own time” to raise $25,000 on GoFundMe for an ambulance for the people of Ukraine.

Seggos said that before he started the GoFundMe, which has raised more than $7,000 since it was created on Sept. 7, he’d already raised enough money to buy one ambulance.

It appears that the DEC’s Executive Deputy Commissioner Sean Mahar and Chief of Staff Erica Ringewald will lead the department while Seggos takes his personal leave.

Seggos tweeted a thank-you to the two staff members — “and fellow staff” — for “holding down the DEC fort” while he’s in Ukraine.

DEC Spokesperson Jeff Wernick declined to specify the amount of personal time Seggos is taking from the department. Wernick deferred all questions about Seggos’ personal leave to Seggos’ tweets since the Ukraine trip isn’t DEC-related.

The Albany Times Union reported Tuesday that Seggos would be in Ukraine for around two weeks.

Seggos tweeted that he’d post updates about his trip “as security conditions permit.”

Seggos — who was appointed as DEC Commissioner by former Gov. Andrew Cuomo in 2015 — was a Captain in the U.S. Army Reserve for more than eight years, according to his Linkedin profile.