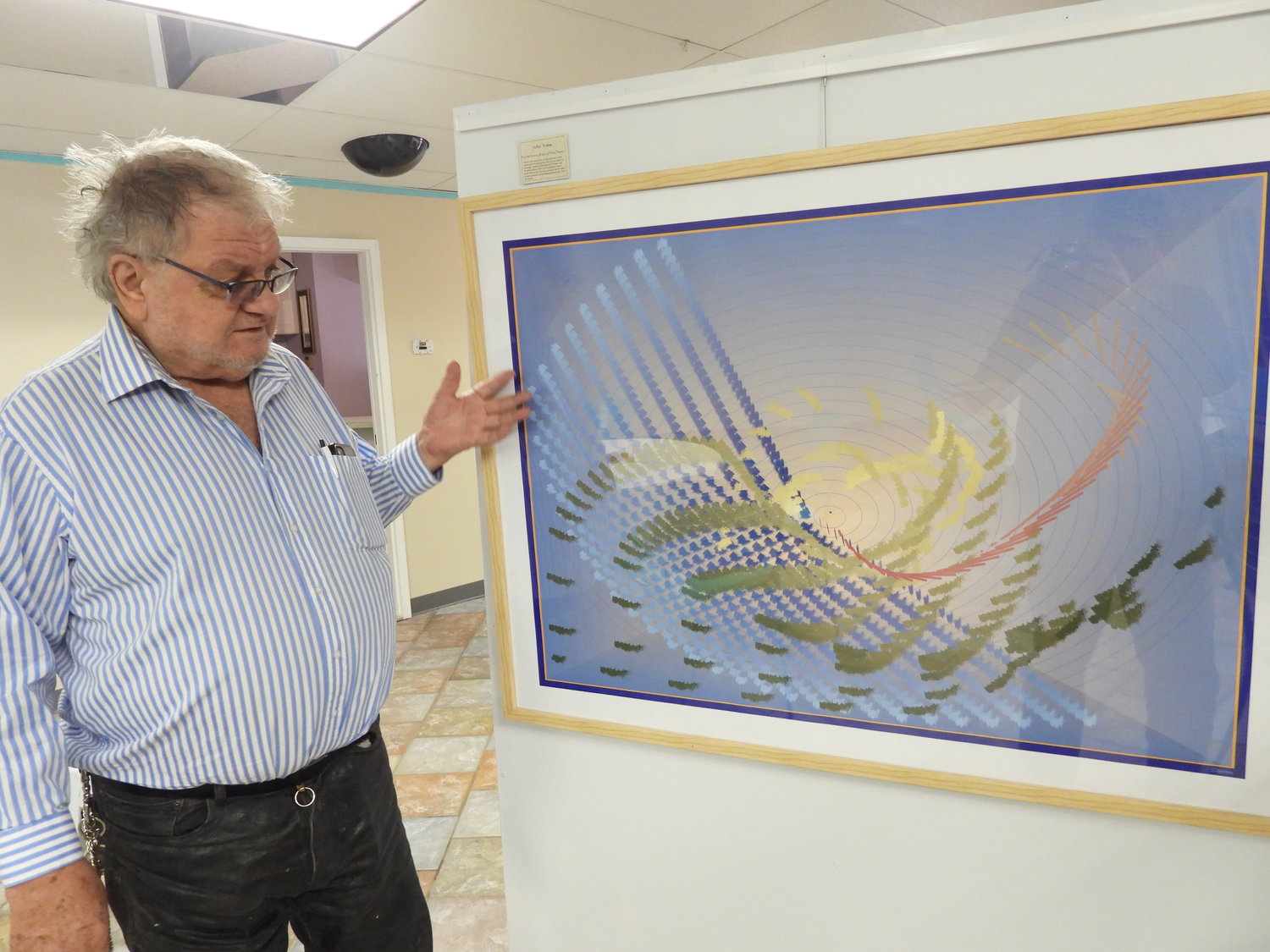 TO FLY - TO SOAR — A digital art piece, “To Fly - To Soar” is based on two musical pieces: Sibelius Symphony Number 5 and Ralph Vaughan Williams’s “The Lark Ascending.” Both deal with flight and birds.
(Sentinel photo by Charles Pritchard) 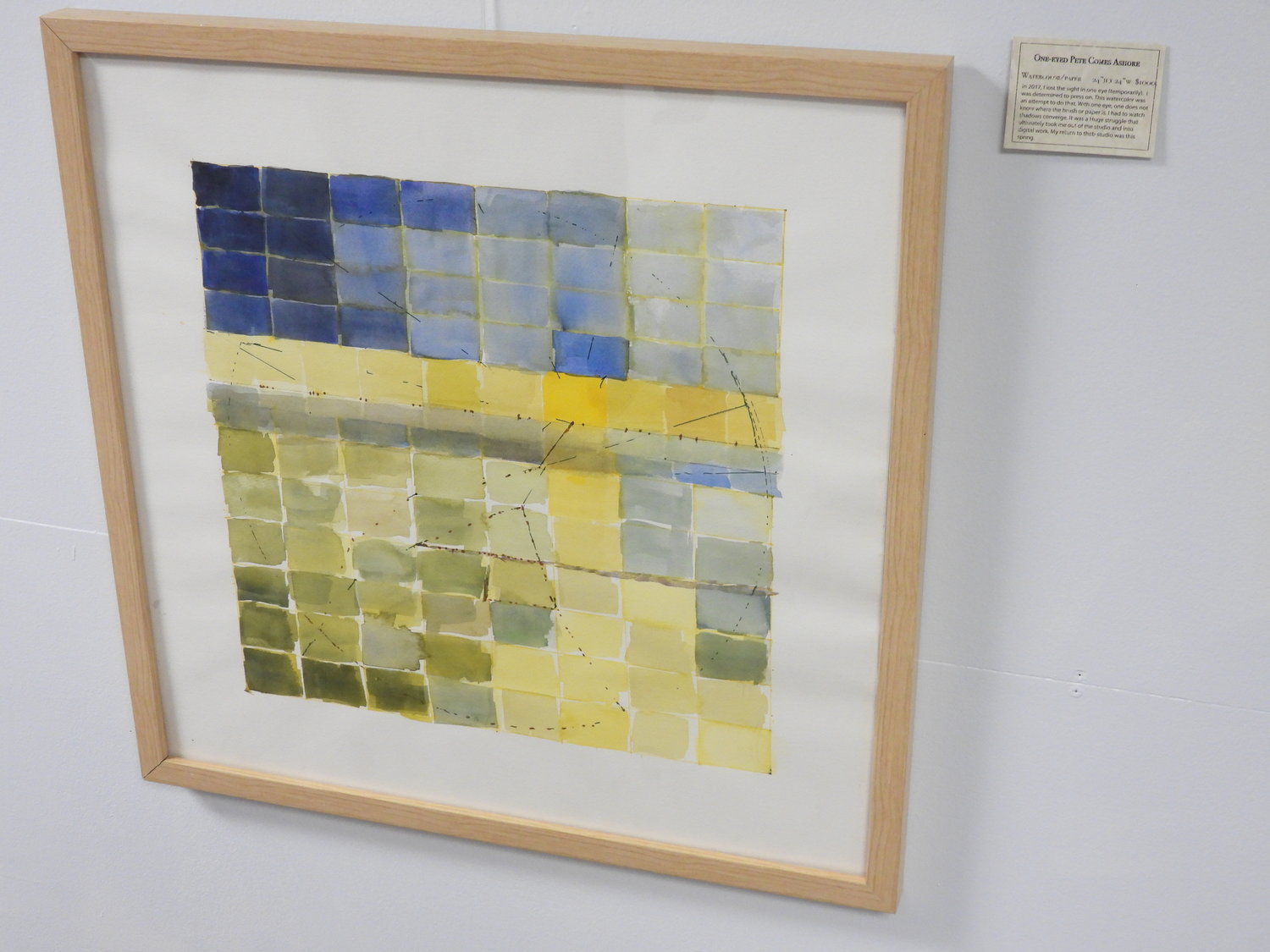 PETE COMES ASHORE — After his accident, North Bay artist Stephen Carpenter painted this piece as a way to determine what he could do with one eye as an artist. With a lack of depth-perception, Carpenter moved to digital art.
(Sentinel photo by Charles Pritchard) 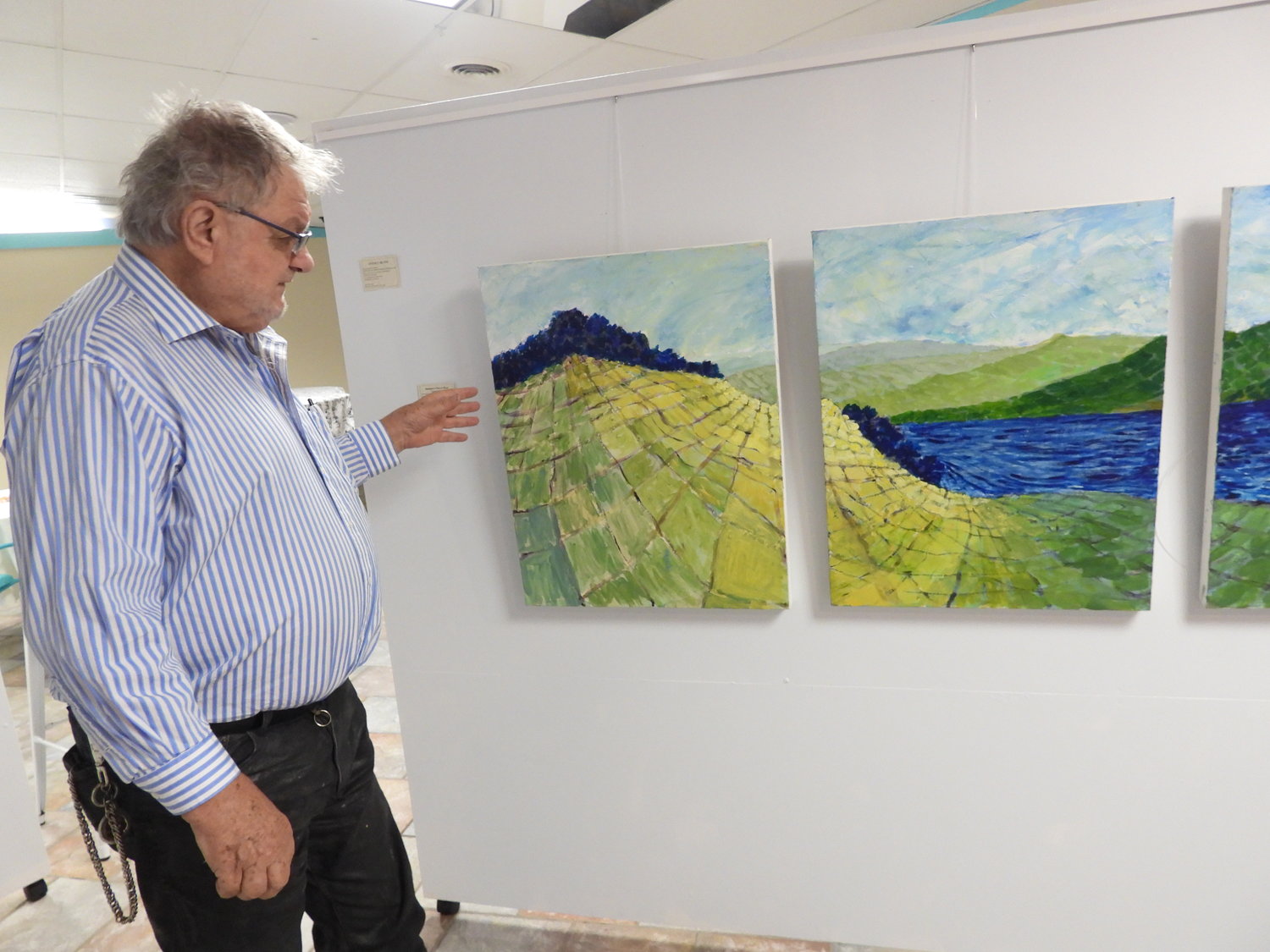 A SYMPHONY IN YELLOW AND BLUE — A series of three acrylic paintings, a triptych, was one of Carpenter’s latest pieces on display and entitled “A Symphony in Yellow and Blue,” based on his childhood in the Finger Lakes. Carpenter regained some of the sight in his eye and has redeveloped his depth perception.
(Sentinel photo by Charles Pritchard) 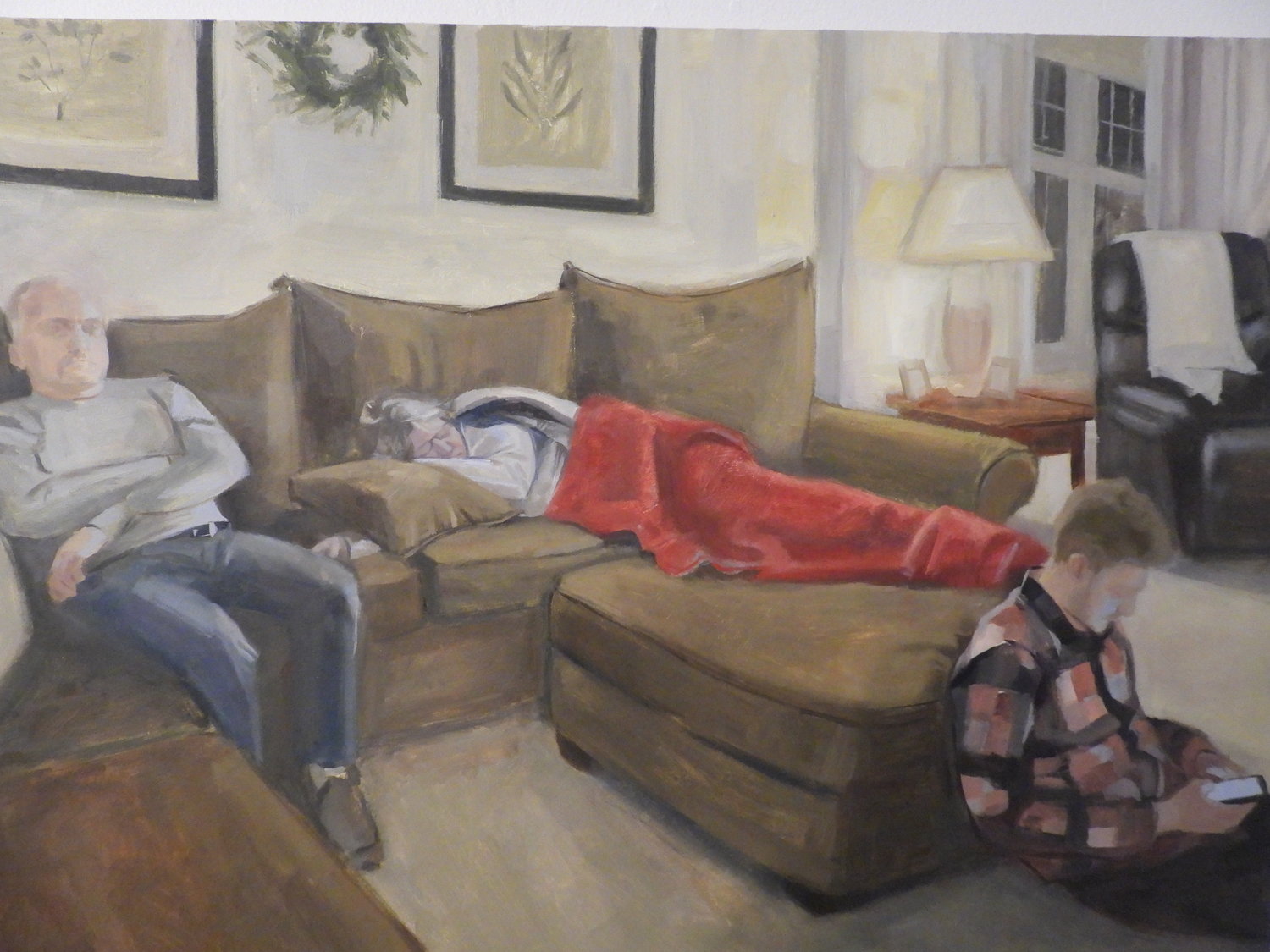 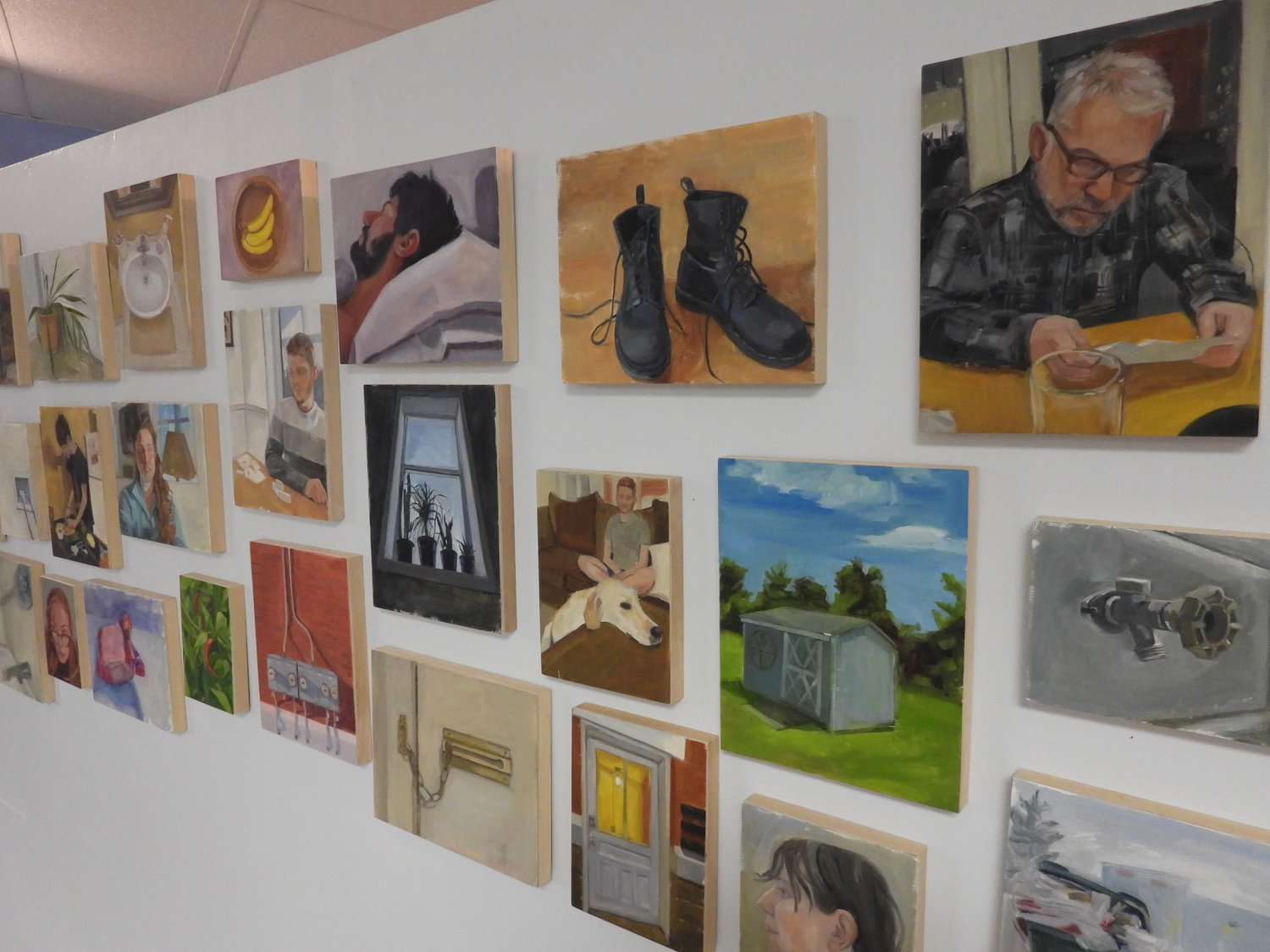 SYLVAN BEACH — The Oneida Lake Arts and Heritage Center, 1201 Main St., is a place for people to enjoy a cup of coffee and see the work of local artists, like Stephen Carpenter and Sophie Infarinato.

Founder and President Linda Williams said she wanted to develop a cultural center in Sylvan Beach, encouraging local talent from all around while offering the community a chance to learn and experience something different.

Carpenter, a resident of North Bay, was recently awarded “Best in Show” by the Ann White Academy Gallery for his work “Pirouette” — a piece capturing the feeling of movement through art.

Carpenter has always had an interest in art, but an accident in 2017 robbed him of the use of his right eye. Depth perception is essential for artists, and without his eye, he had trouble determining where the brush was on the canvas.

One of the paintings on display at the Center was titled “One-Eyed Pete Comes Ashore.” A swatch of watercolors was Carpenter’s real first attempt to determine just what he could do with one eye as a painter.

“I had to watch the shadows converge,” he said. “It was a huge struggle that ultimately took me out of the studio and into digital work.”

With a flat surface to work on, depth perception wasn’t needed, and Carpenter’s work shifted into capturing movement.

One of his works, “To Fly - To Soar,” is specific to a couple of pieces of music.

“My background is visual art, but I also study a lot of music,” Carpenter said. “[It’s] based on two pieces in particular: Sibelius Symphony Number 5 and Ralph Vaughan Williams’s “The Lark Ascending. Both deal with flight and birds.”

Carpenter’s “To Fly — Soar” is a representation of what he calls
“unfettered flight.”

The red swirl represents the path to the sky and taking flight — to soar, just like in the pieces of music. It’s become a popular piece and has appeared in several art shows.

But besides his computer graphic pieces, Carpenter has started painting after regaining some of the sight in his eye. Numerous acrylic paintings hung up were done in May by Carpenter.

“In May, I had just enough sight to make just a single brushstroke,” he said. “That gave me the depth perception that had been missing for almost five years.”

A series of three paintings — a triptych — was one of Carpenter’s latest pieces on display and entitled “A Symphony in Yellow and Blue,” based on his childhood in the Finger Lakes. Carpenter said landscapes are expansive and hard to fit in just one panel. “And this one needed three panels,” he said. “And you can look at it from various viewpoints because that’s how we look at landscapes. We see it as parts.”

As his newest piece, Carpenter said it’s currently his favorite — but there’s more coming. Canvass is stretched and primed for the Bolero.

Bolero is Carpenter’s next big project that involves the work of Pierre Cocherau. Cocherau performed an improvised piece of music in May 1973 at Notre Dame that has stuck with Carpenter over the years.

“I became fascinated with the music and thought that I should do something with it,” he said.

Carpenter wants to visualize Cocherau’s piece and show “...the color of the sound and the sound of color.”

“I’m going to take specific measures and places in the music and make visuals of those,” Carpenter said.

At the moment, he’s working on sketches and rough drafts of just what each sound looks like on paper. “The snare drum is strange because it’s percussive when the stick hits the drum head, but then you’ve got the metal underneath that rattles, making a secondary halo of sound.”

In a way, Carpenter is trying to evoke a sense of shared synesthesia with viewers.

“There are those that believe that synesthesia is wired into our brains by way of our senses,” he said. “Everything we know, we know because of sensory input. We don’t know because we studied it; we know it because we’ve studied it and understand it in terms of what we can see, hear, taste, and feel.”

The challenge is coming up with something that feels similar to different people. Carpenter said it’s alright if he decides D Minor is colored teal and someone disagrees with him, but he hopes to explore the music deeply and find connections that other people can agree on.

Until then, the North Bay artist is keeping a lot of the project under-wraps and plans to reveal more when the time comes.

For more information about Carpenter and his work, visit his website at https://carpenterhillstudios.com

Infarinato has exhibited her work in several regional juried shows and earned multiple honors and awards. She recently had her first solo exhibition, “Captured Moments,” at the Timothy McHenry Gallery in Oswego.

Captured Moments are a series of small oil paintings that capture small moments in Infarinato’s life.

“I began taking photographs of moments that struck me emotionally and visually so that I could reflect on them further through painting,” she wrote. “This series focuses on examining the ordinary with visceral reactions through oil paint. The paintings depict scenes from everyday life, especially focusing on fleeting moments with loved ones and the existential, endearing feeling that comes from experiencing the mundane.”

Each painting was completed in a direct, one-session method taking around two to five hours each.

For more information about Infarinato or her work, visit her Facebook at www.facebook.com/people/Sophie-Infarinato/100063532392662/