Billed as a contemporary musical, the show “Next To Normal” opens Thursday, Aug. 11, for a four-performance run at Rome Community Theater, 8911 Upper Turin Road. 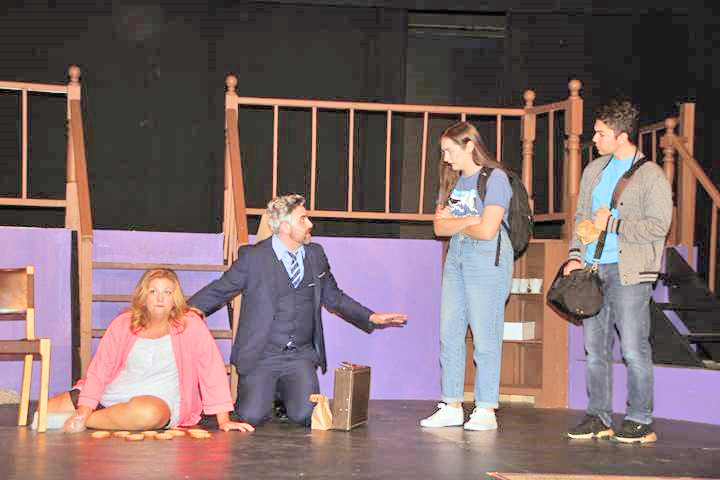 Cast members rehearse a scene from Next To Normal which will open Thursday at the Rome Community Theatre. From left: Jessica Sargent-Wilk, Shane Archer Reed, Hannah DeStefano and Chris Toia.
(Photo submitted)
Posted Tuesday, August 9, 2022 11:00 am

ROME — Billed as a contemporary musical, the show “Next To Normal” opens Thursday, Aug. 11, for a four-performance run at Rome Community Theater, 8911 Upper Turin Road.

Curtain time is 7:30 p.m. on Thursday, Aug. 11; Friday, Aug. 12; and Saturday, Aug. 13. There is a 2:30 p.m. matinee on Sunday, Aug. 14. Tickets are $15 for adults, $10 for students and will be available at the door beginning one hour before curtain time. Advance sale tickets are available on the RCT website at romecommunitytheater.org.

Justin Jones directs the production with music by Tom Kitt, book and lyrics by Brian Yorkey. Josh Clanton is the music director.

The production is rated PG-13 with subject matter addressing mental health issues including drug abuse, suicide and ethics in modern psychiatry. The story centers on a mother who struggles with bipolar disorder and the effects that managing her illness has on her family.

“Next To Normal” opened on Broadway in 2009. It was nominated for 11 Tony awards and won three. It received the 2010 Pulitzer Prize for Drama.

Season tickets for the RCT 2022-23 productions will be available during the intermission of each performance of “Next To Normal.” The upcoming Rome Community Theater season features the Irving Berlin musical “Annie Get Your Gun,” with six performances in October. In December, the RCT will feature a feel-good production of fun and laughs for fans of the traditional British farce with the staging of “Tom, Dick and Harry.” The comedy “Drinking Habits” will be presented in February 2023. The story of Antonio Salieri’s manipulation of Wolfgang Amadeus Mozart forms the basis for the storyline of “Amadeus” which will run for six performances in April 2023. A humorous trip through time and the imagination is featured in the play “Helium” which will round out the RCT season in June 2023.