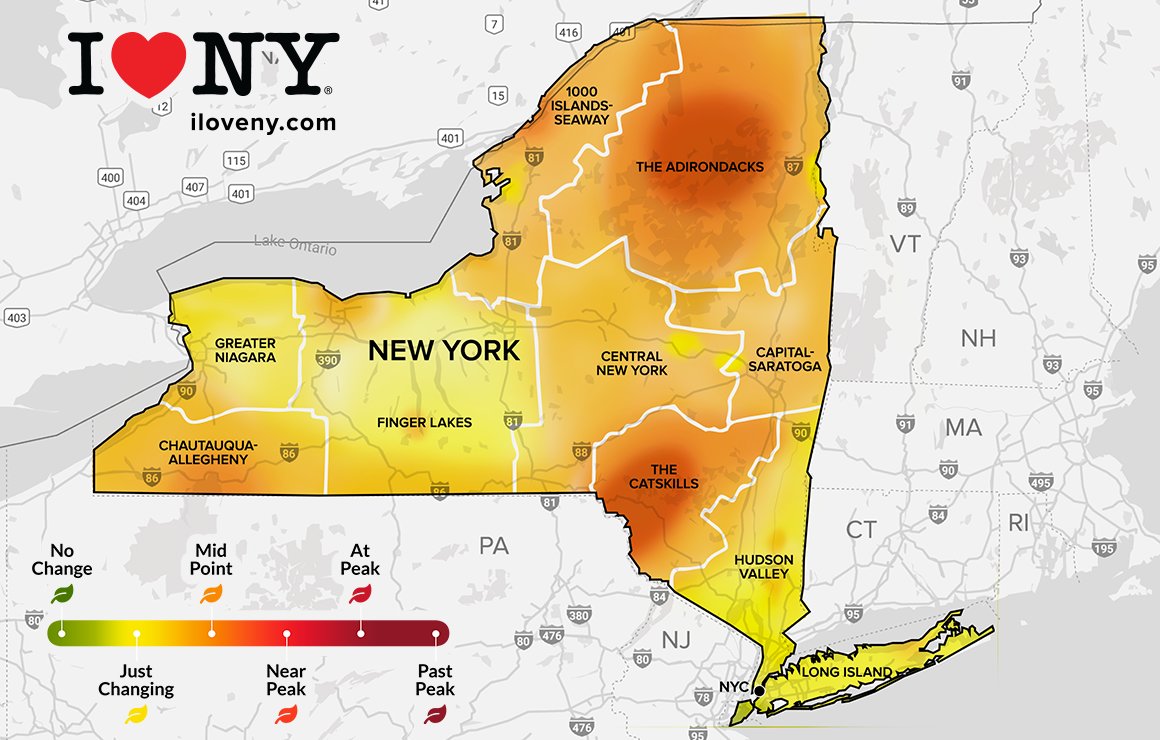 ALBANY — Vibrant peak and near-peak leaves will continue to arrive in the Adirondacks this weekend while making their first appearances in the Catskills, according to the New York State I Love NY Fall Foliage Report.

The report, which is updated each Wednesday, is generated from trained volunteer field observers and reflect expected color conditions for the coming weekend.

While the leaves have only begun to change in most of the Mohawk Valley, colors to the north, in the Old Forge-Inlet area, are already bright and dazzling, according to observers, with nearly 80% of trees changed. Leaf peepers will be treated to near-peak conditions with flourishes of brilliant red and orange bursts highlighted by strong yellow tints with some burgundy emerging. Observers say, such popular spots as Bald Mountain, Fourth Lake and McCauley Mountain are already showing spectacular brilliance for the season.

In Central New York, Oneida County spotters from Utica are predicting 30% foliage change with muted-to-average orange and yellow leaves, and a lot of remaining green with some brown spotting, this weekend. Madison County spotters near the Oneida Community Mansion House in Oneida expect 25% foliage change this weekend with increasing amounts of orange leaves of average brilliance.

In Otsego County, color change is accelerating near Cooperstown with up to 25% transition and average fall shades of yellow, orange, and golden brown, the I Love NY Foliage report says, while spotters in Schoharie County, near Cobleskill, are only seeing 10-15% color change.

There is more colorization in the state’s Southern Tier, observers say, with Broome County between midpoint and near-peak. Travelers in the Binghamton and Whitney Point areas will see roughly 45% color change with vibrant red and yellow leaves, bright pops of orange, and slightly more color change in the northern portion of the county.

Foliage will be nearing midpoint of change in Chenango County, according to spotters in Norwich, who predict 45% color change with occasional spots of color mixed with mostly muted green and brown leaves, the state report says.

Most other areas of the state will range from 20% to approximately 50% leaf transition this weekend, according to the report, with the Niagara Falls area,the Catskills and the St. Lawrence Seaway/Thousand Islands areas as the most colorful of the remaining state regions.

In the Thousand Islands-Seaway region, Jefferson County reports from Wellesley Island and inland predict up to 80% foliage change and near-peak conditions this weekend. The early yellow leaves are peaking, but the maples are beginning to steal the show with intense shades of red, orange, and burgundy appearing, the report adds.

Oswego County spotters expect midpoint of change this weekend, with 55% transition. The landscape in the northern portion of the county is showing the most color, with muted shades of orange and yellow, while trees in southern portion continue to produce subdued shades of green and brown.