City charts course for next phase of Mohawk River Trail 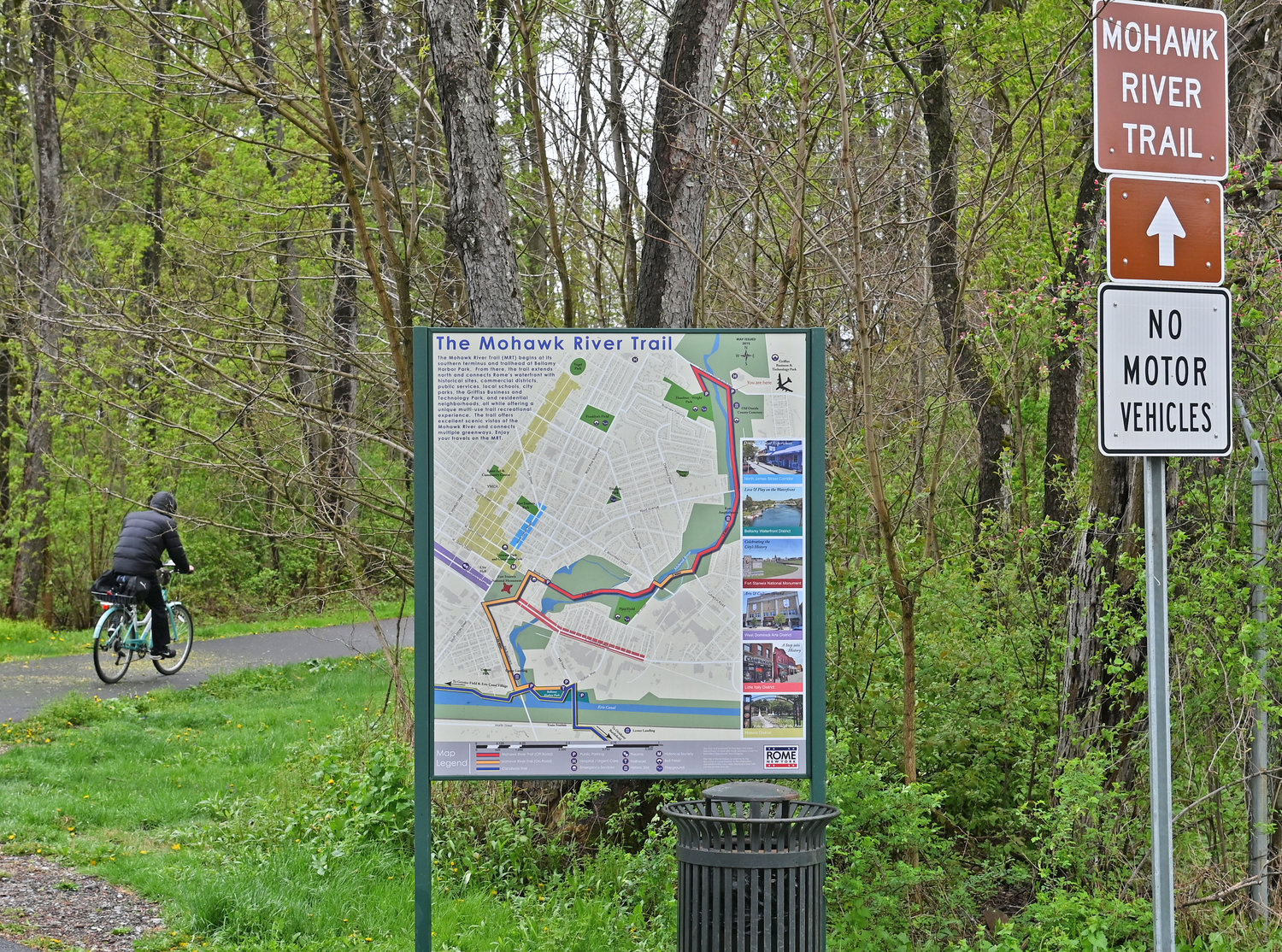 INTO THE WOODS — A bicyclist braves the rain as they head southwest at the Mohawk River Trialhead on East Chestnut Street on Tuesday. The city is moving forward with Phase II of the trail plan, which would begin construction of the trail north to Ridge Mills from the trailhead to a spot near the intersection of Black River Boulevard and Wright Settlement Road.
(Sentinel photo by John Clifford) 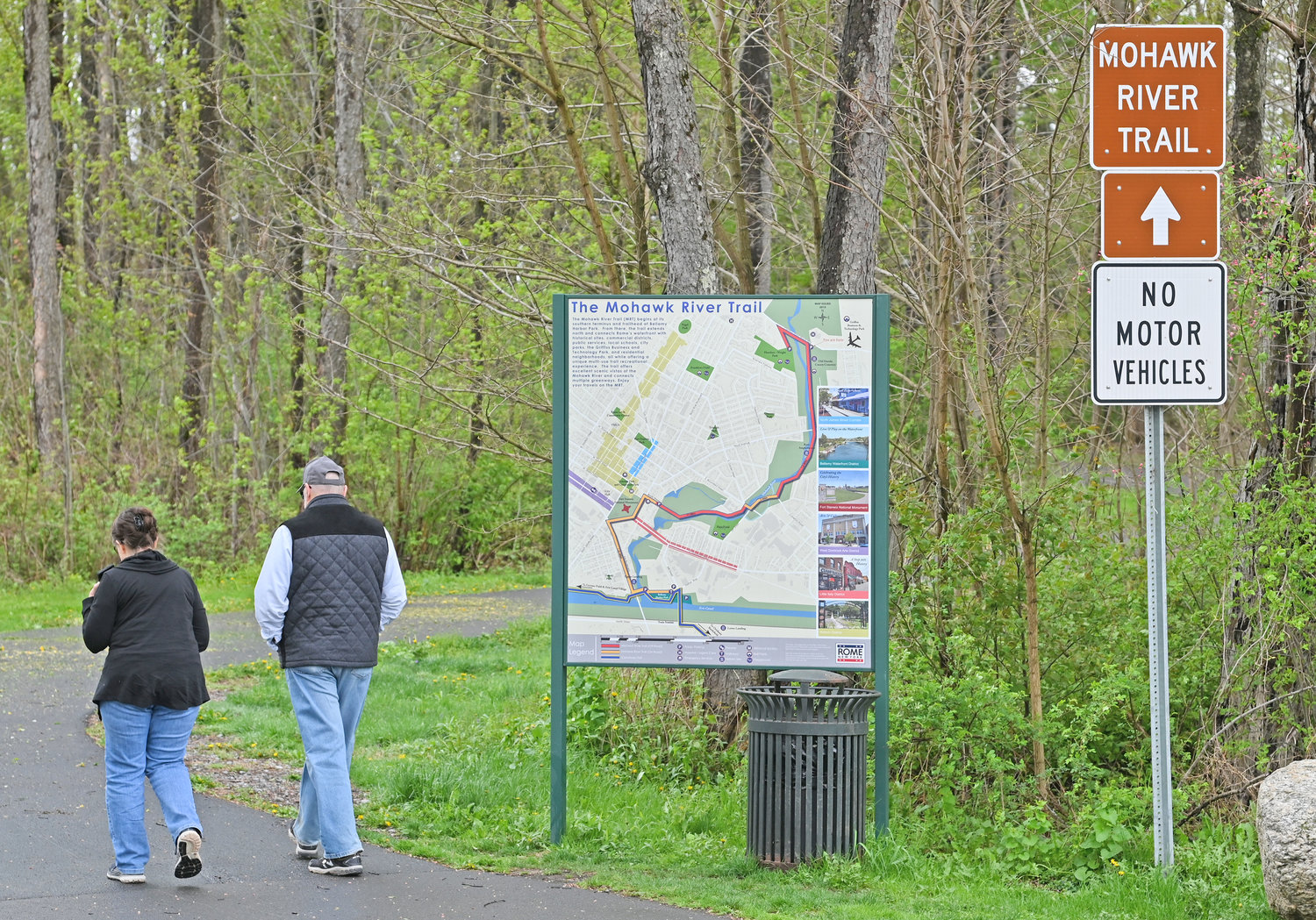 A couple starts out on their walk today at the Mohawk River Trialhead on East Chestnut St. Tuesday afternoon.
(Sentinel photo by John Clifford)
Previous Next
Posted Wednesday, May 5, 2021 4:00 pm
Nicole A. Hawley
Staff writer
email

Work on Phase I and II of the Mohawk River Trail continues to progress, with the acceptance of a use and occupancy permit for the second phase of the project.

Rome Common Council voted to accept the occupancy permit last month, which authorizes the city to work with private property owners to secure a public right-of-way (easement) for Phase II of the trail project.

The approval, “allows the city to apply for a permit to utilize some of the public state right-of-away on Black River Boulevard for the project,” explained city Deputy Director of Community and Economic Development Matthew J. Andrews. “...Now we’re working with private
property owners to establish the public trail through the right-of-way process. Phase II of the trail will be constructed from the existing parking lot on Chestnut Street — utilizing the pedestrian area on the Chestnut Street bridge — and continue to loop back toward Wright Haselton Park and (also) continue up the bridge north to Olney’s Flowers” on North James Street.

Back in 2017, the city received $1.4 million to construct the second phase of the Mohawk River Trail in order to extend it further north. It was part of $112.2 million in state funding awarded to 81 projects that supported bicycle and pedestrian enhancements and improvements to air quality across New York at the time.

The existing portion of the trail that is already completed and open runs from Bellamy Harbor Park north to the bridge where Chestnut Street becomes Mohawk Drive at Griffiss Business and Technology Park. When Phase II is completed, the trail will continue from there and run further north along the river’s east side near the intersection of Black River Boulevard and Wright Settlement Road. Andrews said the projected completion date for Phase II will be sometime in 2022.

Eventually there are plans, as part of Phase III, for the trail to reach all the way to Delta Dam, but that phase is not yet funded, Andrews said.

The Culverton Avenue segment of the trail was “substantially completed” last year, he said, which included the site contractor paving that trail segment and replacing sidewalk. The connection creates a “shared use” situation so bicyclists who don’t want to ride in the road, can utilize the multi-use path, said Andrews.

They are “finishing up with a small guardrail section” at the Culverton Avenue segment, and work will include “benches and other site amenities” to be added, “plus a new trail map and landscaping,” he said.

Andrews said, “We’re putting out authorization to bid on a pedestrian improvement project along some respite areas — there’s three that overlook the river.”

While work on the existing Phase I is going out to bid this month, the Common Council gave approval for the mayor to sign an ease permit for Phase II.

“We’re working with individual property owners to secure a public right-away for Phase II, Andrews explained. “If everything goes smoothly, we’ll have that secured and a design approved for the state DOT (Department of Transportation) later this year. Construction shouldn’t take too long — they could finish up sometime next year.”

Phase II will run from the spur at Wright Haselton Park and extend that spur to under the Griffiss Parkway bridge and travel along the river, up to Olney’s Flowers on North James Street.

Andrews said while monies have been secured for Phase II, the city will “see what happens” with any possible stimulus funding made available for Phase III.

“We essentially designed Phase II and III together, and we’re anticipating we’ll secure construction funding for the length of trail that extends to the dam,” he said.

As for Phase III of the project, “that should go quickly — there’s not really any private ownership — it’s mostly public entities that own the land through that section so there wouldn’t be a right-of-way phase of that project,” said Andrews.

There is a towpath that runs along the Black River Canal that is usable and runs up to Rome Fish Hatchery, with an access point at that location. Once Phase III of the Mohawk River Trail is complete, it will be “easier and safer” for users of the trails to access the network, Andrews said.

CAMILLUS — John Katko’s reputation as a moderate Republican has served him well in a district with an urban and rural constituency, but he has found himself out of step with a portion of the GOP …