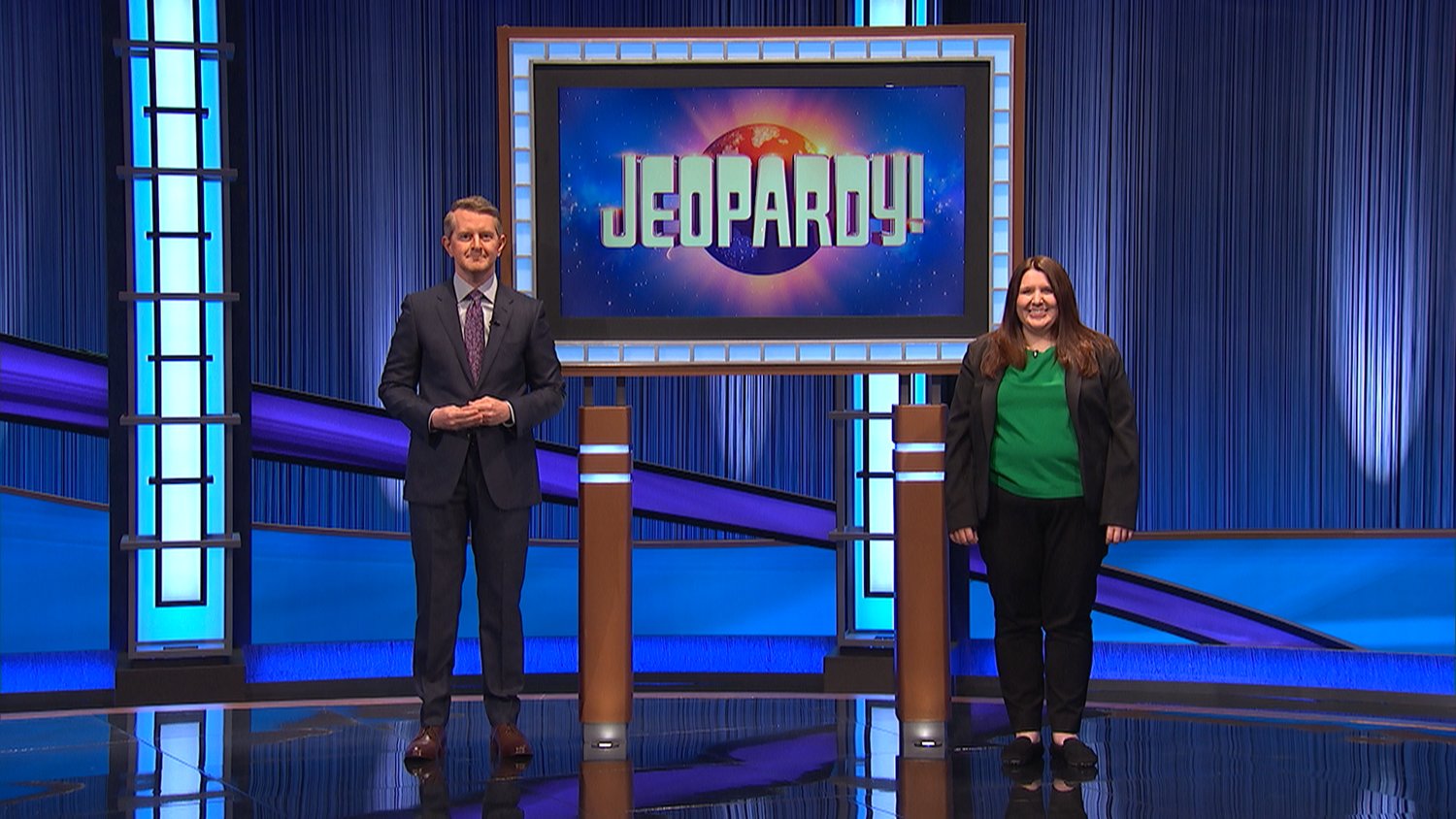 Brianne Barker, associate professor and chair of Biology at Drew University, Madison, New Jersey, said she and her family have watched “Jeopardy!” for as long as she can remember and she always thought it would be great to appear on the show.

“I learned about the online test and began taking it in 2012. You are able to take the online test once per year, and I took it pretty much each year since 2012,” Barker explained. “The test is a 50-question test online where you have 15 minutes per question. After taking the test in March 2018, I was invited to audition in-person in New York City in May 2018.”

She said, “Following the audition, you are in the ‘contestant pool’ for 18 months, during which time you just have to wait to be contacted. If the 18 months pass without contact, you have to start the process again, which is what happened to me. So after taking the test in July 2021, I was contacted to audition over Zoom in August 2021.”

The audition process changed at that time due to the COVID-19 pandemic, which is why they were held on an online forum via Zoom. After her first audition on Zoom, Barker said she was invited to a second round. And after that?

“More waiting,” she said. “Then I got a text from a “Jeopardy!” producer in April 2022 to talk about my application and officially booked about a week later.”

On May 17, Barker went through the painstaking process of filming five episodes of the trivia show, which aired July 25-29. And during that time between booking and filming, “There was a lot of paperwork to fill out, including filling out lots of information about my life to give them material for ‘fun facts’ to discuss in interviews, COVID tests and other things to figure out,” Barker said. “I wasn’t able to tell anyone about being selected to be on the show until the publicity photos came out, and keeping the secret was very hard. It was also difficult to balance the preparation that I hoped to do with the work of finishing the (spring) semester.”

Barker started teaching biology and doing research with undergraduates at Drew University in 2013. She teaches courses in Immunology, Virology, Microbiology, and Infectious Disease.

“I also focus on Science Communication and co-host two podcasts: ‘This Week in Virology’ and ‘Immune,’” she added.

Going back to her roots, Barker graduated from Camden High School in 1998 and in addition to excelling on the field hockey team, she was valedictorian of her class. She said the Daily Sentinel published a story about her SAT score in 1997. Her younger sister, Kim, was also a Camden graduate, and her parents still live there — both retired teachers from Camden Elementary School.

After her high school days, Barker went on to Duke University, where she earned her bachelor’s of science degree in biology in 2002.

“I was a big basketball fan at Duke!,” she quipped. “I also started doing research in a laboratory working on HIV vaccines during my freshman year at Duke. I then went to Harvard University for a doctorate in Immunology, where I worked on understanding T cell immune responses to viruses and vaccines. I then worked as a postdoctoral fellow at the University of North Carolina at Chapel Hill on further aspects of immunology.”

While conducting her post-doctorate work, Barker said she realized she wanted to teach and do research at a small liberal arts college, and took a two-year visiting position teaching biology at Hamilton College in Clinton — close to her hometown.

“Thanks to my experience at Hamilton, I started teaching biology and doing research with undergraduates at Drew University in Madison, N.J.,” she said.

While the process of finally earning her opportunity to appear on Jeopardy! seemed at times tedious, Barker said the work was worthwhile as it was an “absolutely amazing” experience. Besides keeping a few pictures that friends’ children drew for her as “lucky charms,” Barker also wore her “virus” earrings.

“It was so much fun and even better than I had imagined it would be,” said Dr. Barker. “I am a very competitive person, so I spent some time beforehand thinking about how it was all about ‘having a fun adventure’ and not about winning, because I didn’t want to leave my dream experience disappointed. In the end, it didn’t matter because ‘fun adventure’ is an understatement for how much I enjoyed it.”

Barker flew to Los Angeles for taping on May 16, and then went to Sony Studios for a COVID test. She reported back to the studio at 7 a.m. the next morning for taping.

“I had to wear one potential outfit that fit the criteria that they had sent and bring four others,” said Barker of the show requirements. “There were 12 contestants: the person who was the reigning champion, 10 contestants for the week of shows, and one alternate. My fellow contestants were then brought to our ‘green room’ and told to shut off our phones for the day. Because of COVID protocols, we did not spend time in the actual green room and instead were in the Wheel of Fortune studio, as they were finished filming for the season.”

All contestants were then briefed on COVID, legal and other information before presenting their outfits to the wardrobe department, whose staff chose what the contestants would wear before each outfit was steamed. Their hair and makeup was also done up by professionals.

“Then we went over to the Jeopardy! studio in order to film ‘Hometown Howdy’ TV promos for our local affiliates,” Barker recalled. “Mine was first because we were doing them in alphabetical order. They told us that they would make up a clue about us and we had to ring in with our buzzers and say, ‘Who is Brianne Barker. Hey wait, that’s me!’ When I recorded mine the first time, they told me it was stiff and asked me to do it again. I don’t think the second one was any better.”

She said, “They also told me afterwards that my outfit did not look good on camera and had me change. Needless to say, I was not looking forward to that TV promo, but it didn’t end up being too bad. We then played a couple of practice games so that we could practice with the buzzer system. I was very, very bad at the buzzer during rehearsal. Once that was over, they drew names to determine who would play in the first game of the day, which was the July 25 (Monday) game.”

Contestants who weren’t playing at the time acted as the studio audience seeing no one was allowed inside the studio due to COVID. Being forced to be without a cell phone for the entire day, Barker said the fellow contestants quickly grew close and enjoyed cheering each other on.

After lunch that day, Barker said her name was drawn to play in the third game, which actually aired on Wednesday, July 27.

“There were so many moments throughout the day that were amazing and a bit surreal: seeing the podiums and buzzer and board in person, seeing all of the little details about how the show is made, what happens during commercial breaks, seeing how they deal with a contestant who is short like me among many others,” she laughed. “I couldn’t believe I was really there and really meeting Ken Jennings. The game itself was a total blur…I was so nervous and didn’t remember all of the things that happened. It felt like the whole thing took about five minutes.”

But some of those lucky charms carried by Barker must have come in handy that day. Being someone who studies viruses for a living, she couldn’t have been more fortunate to get the Jeopardy! answer, “COVID variant names skipped nu and this 14th Greek letter.” Her question? “What is xi?”

After beating previous champion Ed Coulson and challenger Colleen Birney with a total of $11,700, Dr. Barker went back to wardrobe to change and have her hair and makeup touched up before it was time to play again. The whole time between shows, “Everyone called me ‘Champ,’ like ‘OK Champ, time to go to makeup,’ and that made me even more nervous. We left the studio around 6 p.m. and a few of us went out to dinner afterwards. In general, I felt nervous most of the time, although there were a few minutes where I was ‘in the zone’ and could sort of block it out.”

Barker would lose her second game, which aired on Thursday, July 28.

Besides the nerves associated with appearing on national television, Barker said she was also concerned about what it would be like watching the episodes when they did air. To her relief, her Drew University family came out in full support.

“I was a bit worried about having everyone I know watch me on TV and being with my fellow Drew professors at a watch party, but I have never felt more supported,” said Barker. “There were multiple moments while watching the games where I was surprised: I had forgotten many of the questions. I have no idea how they made me look so calm and confident since I felt anything but — based on that and their hair and makeup abilities, I am pretty sure the Jeopardy! crew must be magic.”

And the encouragement Barker has received even following her Jeopardy! stardom has been surprising, she said. People have shared they enjoyed watching and cheering her on with family gathered around the flat screen.

“All of the support and excitement from everyone in the community made watching the episodes a whole second fun adventure that I didn’t expect,” she beamed. “Another unexpected positive that came out of the experience is that I am in touch with all of the other contestants who recorded that day and I can tell that I have made some friends for life. I hope everyone gets the chance to have a dream experience and to receive so much support over the experience. It is pretty great.”