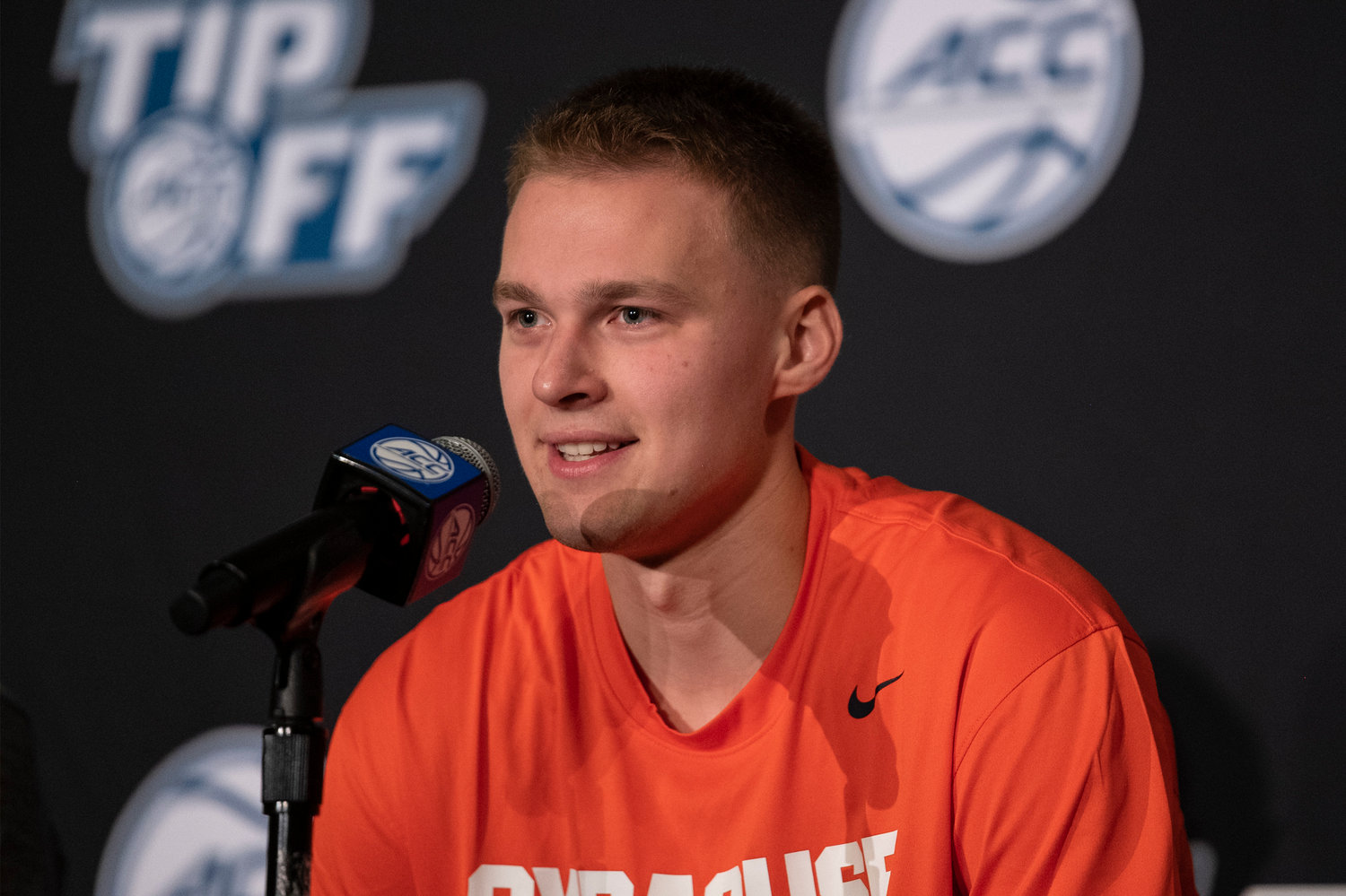 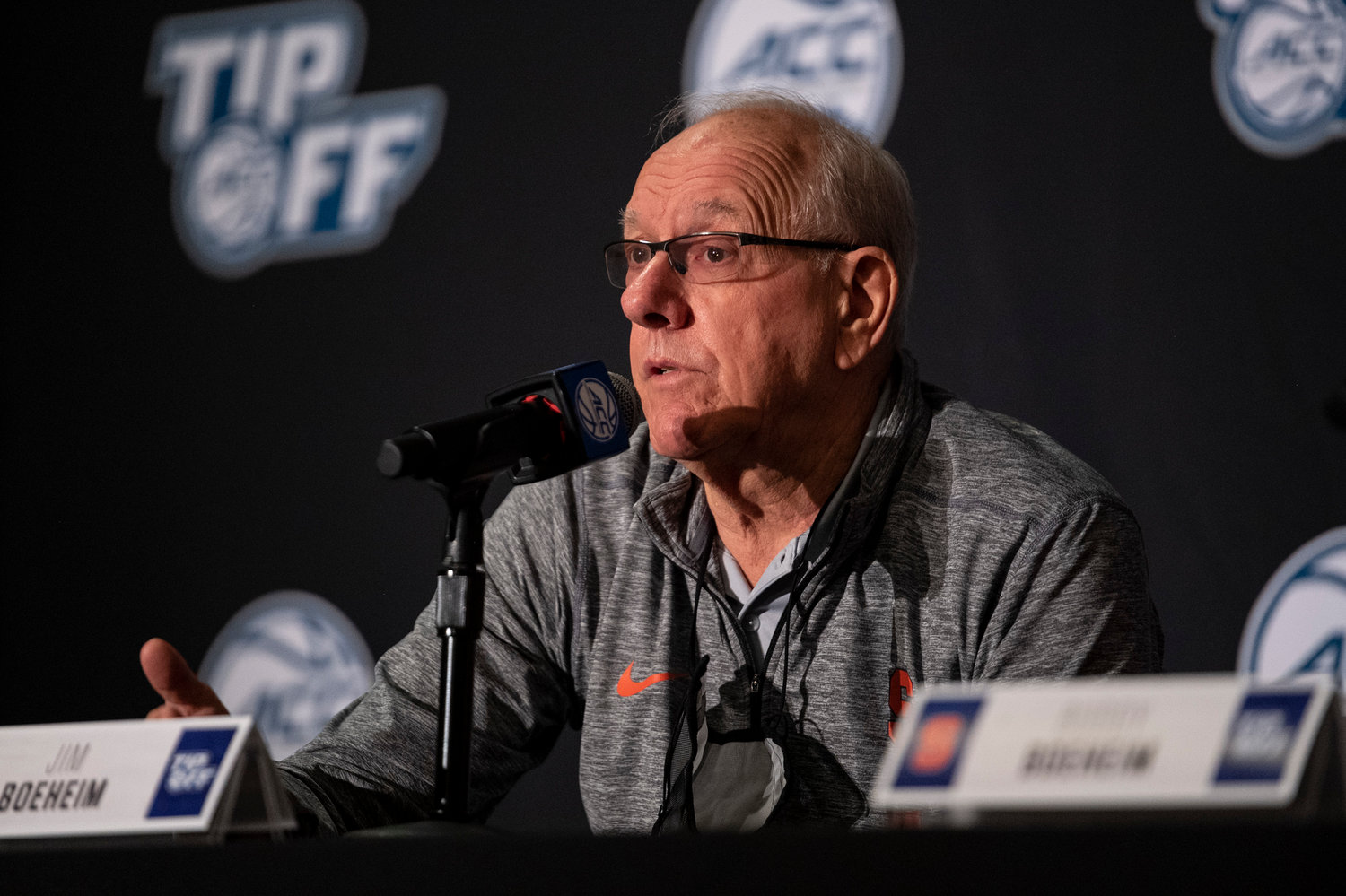 SYRACUSE (AP) — Jim Boeheim is quick with a smile as he gets set to begin a season that will be oh-so-different in his long career at Syracuse — he’ll be coaching sons Buddy and Jimmy.

They’ll be counted on to raise their games. The Orange lost a lot from last year’s team, which finished 18-10 overall and 9-7 in the Atlantic Coast Conference but made a surprising run to the round of 16 in the NCAA Tournament.

Forward Quincy Guerrier transferred to Oregon, swingman Alan Griffin went chasing the NBA and forward Marek Dolezaj will be playing professionally in Europe. The trio combined to average nearly 37 points and more than 19 rebounds per game.

Point guard Kadary Richmond, who shared duties with Joe Girard, also transferred (Seton Hall) and leaves a void in the Orange defense — he led the team with 46 steals. Girard, who hit 50 3-pointers, averaged 9.8 points and led Syracuse in assists (99) and turnovers (59), returns for his third year.

Last season, Buddy Boeheim led the team in scoring, averaging 17.8 points, and his 3-point shooting (77 for 201, 38.3%) and all-around game reached new levels of efficiency. In the NCAA Tournament, he scored 30 points in a first-round win over San Diego State and 25 in a second-round victory over West Virginia, hitting 13 of 23 from behind the arc before Houston stopped him cold (1 of 9) and the Orange lost.

“It showed everyone what I’m capable of doing on a nightly basis,” said Buddy, now a senior. “I think it showed me more than anything that I can do a lot of things besides shoot the basketball — make plays, get in the lane.”

Syracuse garnered a few votes in the preseason AP Top 25, but this year’s veteran squad is picked to finish mid-pack in the ACC.

“We want to finish in the top three,” he said. “That’s definitely something I’m focused on this year, having a good regular season and being one of the top teams consistently throughout the year.”

Expect those totals to go up with the addition of Swider, who shot 40.3% (35 of 87) from long range for the Wildcats.

Syracuse was 13-1 at home last season in the refurbished Carrier Dome — without fans because of the coronavirus pandemic.

The Orange faithful will be back in the so-called Loud House, which regularly has been ranked first or second nationally in attendance since the 1980s.

“It’s going to be huge,” Buddy said. “I think that was the toughest part about last year, not having fans. Having 20, 30,000 will be a pretty great feeling ‘cause I kind of forgot what it feels like.”

It’s been 59 years since Jim Boeheim enrolled as a freshman at Syracuse, and this will be his 46th season as men’s basketball coach. He turns 77 in November and has watched ACC counterpart Roy Williams at North Carolina retire after last season at age 69 and good friend Mike Krzyzewski, who turns 75 in February, announce that this is his last year at Duke.

And Boeheim’s sons will be on to other things after the school year, so it seems the perfect time to call it quits, too, right?

“I feel good,” Boeheim said. “I feel better than I felt two decades ago. I work out more than I did then. I feel good. I think we’re going to have a great recruiting class. I’m looking forward to the future.”

The schedule features a trip in November to the Battle 4 Atlantis in the Bahamas and a home game against Indiana in the Big Ten/ACC Challenge, contests against former Big East rivals Georgetown (away) and preseason No. 4 Villanova (Madison Square Garden) in early December and January home games against No. 25 Virginia and No. 20 Florida State. All of those will take a back seat to Feb. 26, when No. 9 Duke visits and the two winningest coaches in Division I history meet for the final time.