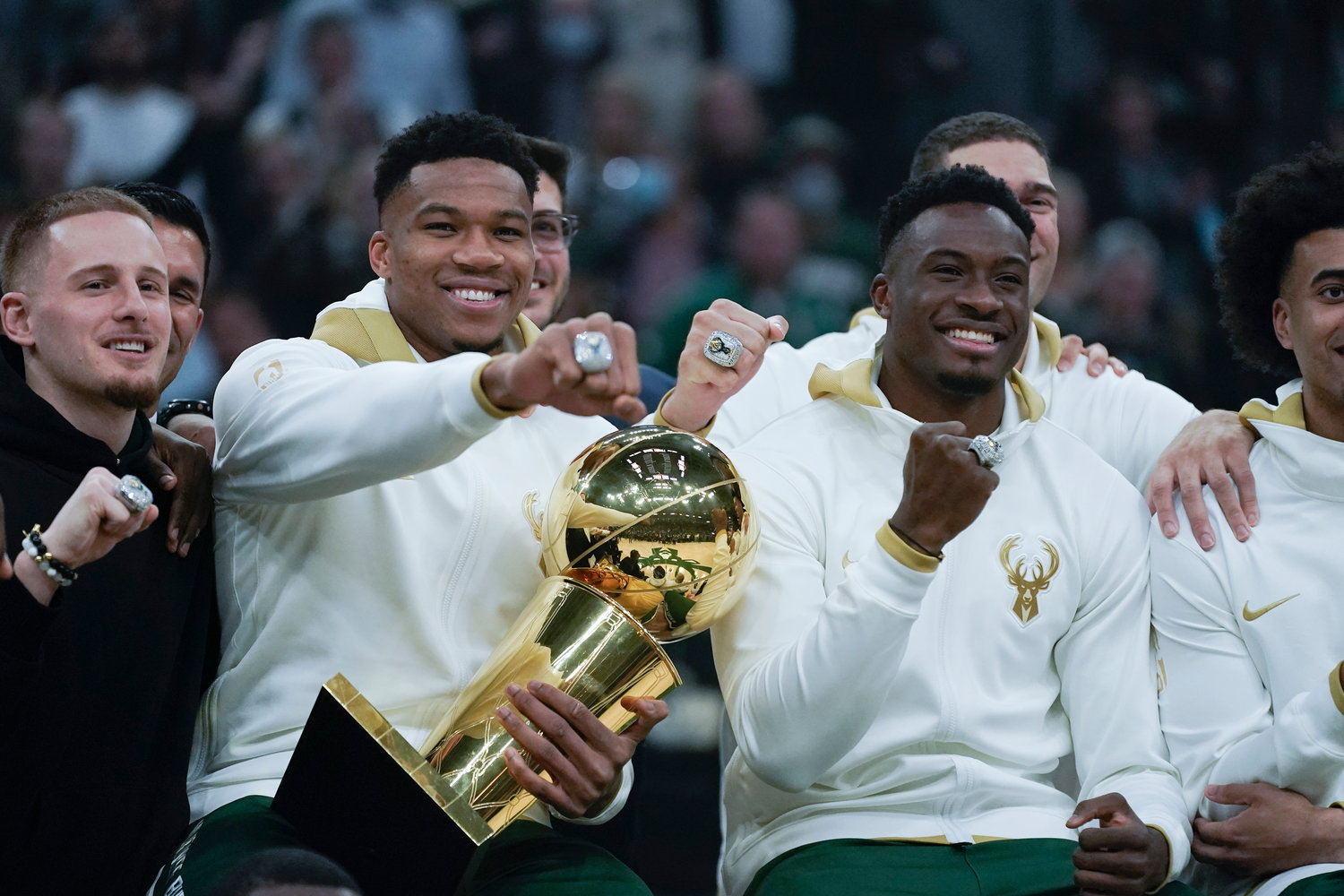 FLASHING THEIR BLING — Bucks players Giannis Antetokounmpo, second from left, and Thanasis Antetokounmpo show off their championship rings before the team's NBA game against the Nets on Tuesday night in Milwaukee. The Bucks won, 127-104.
(AP Photo)
Posted Tuesday, October 19, 2021 10:18 pm

MILWAUKEE (AP) — Giannis Antetokounmpo scored 32 points and the Milwaukee Bucks opened the defense of their first title in half a century by beating the Brooklyn Nets 127-104 on Tuesday night.

In his first game since scoring 50 points in a title-clinching Game 6 NBA Finals victory over the Phoenix Suns, Antetokounmpo also had 14 rebounds and seven assists.

Khris Middleton and Pat Connaughton each added 20 points to help the Bucks withstand the loss of Jrue Holiday, who sat out the second half with a bruised right heel after scoring 12 points.

The Nets were missing star guard Kyrie Irving, who isn’t with the team due to his refusal to get a COVID-19 vaccine.

A New York mandate requires professional athletes on local teams to be vaccinated to practice or play in public venues. Rather than using Irving exclusively in road games, the Nets decided he wouldn’t play or practice with them at all until he could be a full participant.

After receiving their rings and raising a banner to celebrate their first NBA championship since 1971, the Bucks defeated the team that nearly eliminated them in the second round of the playoffs.

Milwaukee rallied from a 2-0 deficit and won Game 7 at Brooklyn in overtime after Durant’s foot barely crept across the 3-point arc in the final seconds of regulation, turning a potential series-winning 3-pointer into a game-tying 2-point basket.

The Bucks went on a 21-4 run in the first quarter to extend a 10-8 advantage to 31-12. They got the lead back up to 19 again in the second quarter and were ahead 66-59 at halftime. The lead never dropped below seven the rest of the way.

Milwaukee got 15 points from Jordan Nwora, a 2020 second-round pick who wasn’t in the Bucks’ rotation as a rookie but could be ready for a bigger role this year. Grayson Allen added 10 points in his Bucks debut.

Milwaukee's championship rings include the messages “Fear The Deer” and “Bucks In 6.” The latter slogan has served as a rallying cry among fans ever since former Bucks guard Brandon Jennings used those words while incorrectly predicting the outcome of Milwaukee's 2013 first-round series with the eventual NBA champion Miami Heat.

Jennings and former Bucks guard Michael Redd were both in the crowd.

The rings, designed by Jason of Beverly Hills, have 360 diamonds on the top to represent the Bucks' total wins under current ownership. There are 16 emerald-shape diamonds on each side, symbolizing their 16 playoff wins last season and their 16 division titles in franchise history.

Herb Kohl, the 86-year-old former U.S. senator who owned the Bucks from 1985-2014, also got a ring and received a standing ovation when he was announced. There are approximately 4.14 carats of emeralds to represent Milwaukee's 414 area code.

Middleton spoke to the fans after the rings were given out and just before the banner was revealed.

“Milwaukee, we did it,” Middleton said. “We finally did it.”