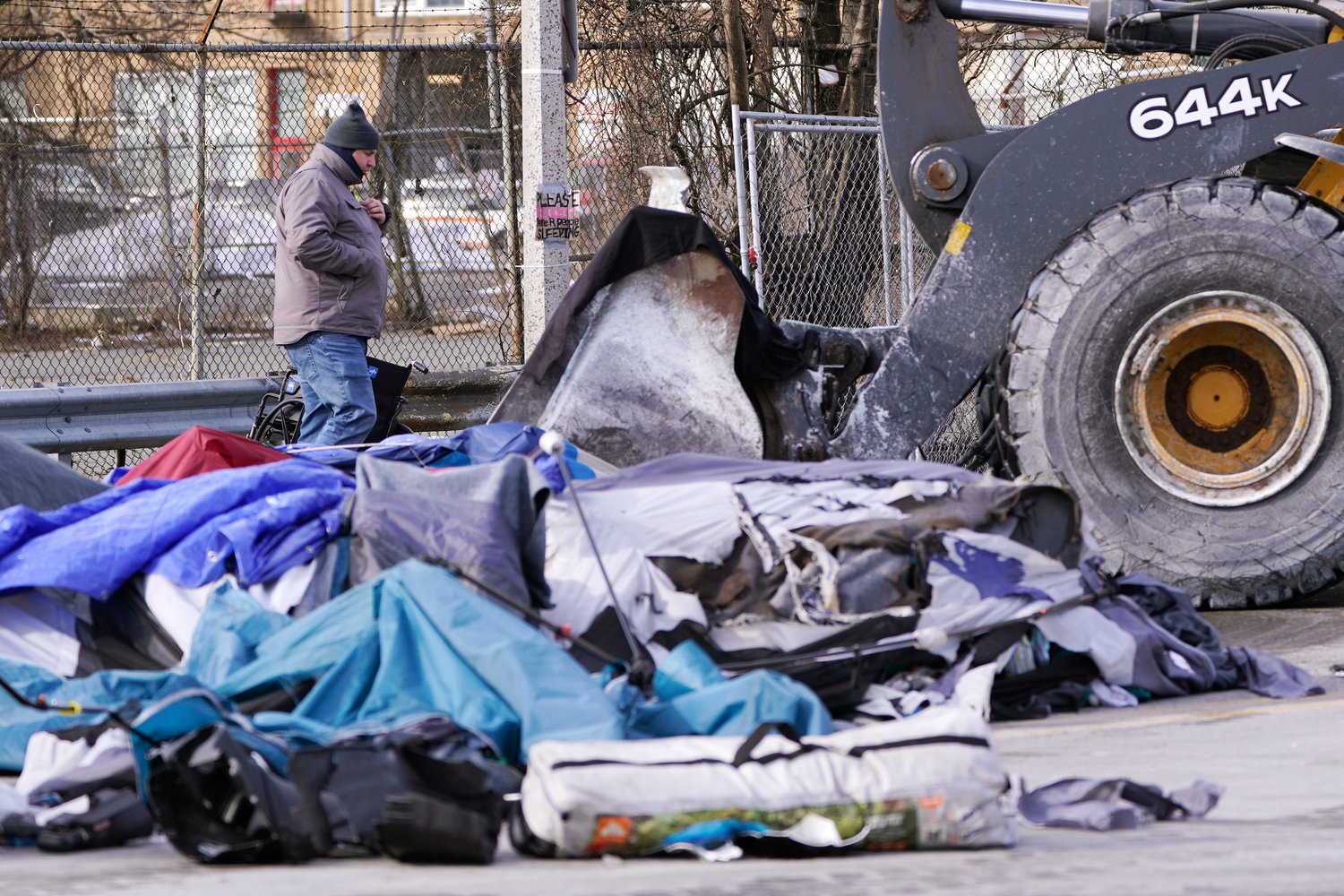 CLEANING UP — A City of Boston worker watches as a front-end loader scoops up tents, furniture and other items as a homeless encampment is cleared from the street Wednesdayin Boston. Boston Mayor Michelle Wu's made good on a self-imposed deadline to move people living in a homeless camp off the streets and into housing.
(AP Photo)
Posted Wednesday, January 12, 2022 9:48 pm

City public works employees driving bulldozers loaded tents, tarps and other detritus, including milk crates, wooden pallets and coolers, into trash trucks to be hauled away, and street sweepers moved in once a section was cleared.

New Mayor Michelle Wu had pledged by Wednesday to get housing for people living in tents near the intersection of Massachusetts Avenue and Melnea Cass Boulevard.

“Our goal from the beginning here was to take a different approach, one that was really grounded in the root causes of homelessness and the crises that people are living with here,” Wu, who took office in November, said at the scene.

Christopher Berrios, a 28-year-old homeless resident, said he lost his job due to COVID-19 and it was hard for him to find a place to stay given the high cost of housing.

“The rent out here in Boston — it’s expensive to get an apartment. Even to get a room, it was expensive,” he said. “Before I was living with my mom and stuff, but then she ended up moving to a one-bedroom apartment, so I couldn’t move with her, you know, because it was a one bedroom.”

Wu acknowledged that it may take more than a day to remove some of the remaining tents.

Social workers helped people who had not yet left the camp, while police were also at the scene Wednesday. Wu and other city officials have said that they do not want to criminalize homelessness, and that officers were there to keep the peace.

The city has approached the encampment as a humanitarian and public health crisis because many of its residents were drawn by methadone clinics and social services in the area and were considered vulnerable to trafficking and other dangers.

A city survey in December found as many as 140 people living in the camp, where drug dealing and use often occurs in the open.

Dr. Monica Bharel, the former state public health commissioner who is now leading the city’s efforts in the area, said that as of Wednesday morning, more than 100 people who had been living in the encampment had been relocated to temporary housing.

The goal is to eventually move people into permanent housing, city officials said.

Some remain skeptical of the city’s plan, concerned that people with no where else to go will continue to gather in the area.

“Until people answer questions, I’m very suspicious,” City Councilor Frank Baker said at a virtual community meeting Tuesday night. “I’m interested in what this is going to look like in the next few months.”

Cleanup of the area began in October under then-acting Mayor Kim Janey, who declared addiction and homelessness a public health emergency.

The city Public Health Commission cited unhygienic conditions, such as a lack of running water and bathrooms, and the susceptibility of residents to “human trafficking, sex trafficking, and other forms of victimization,” in its emergency declaration last year.

Berrios, who said he’s been living on the street for two years, said he welcomed the chance to have a more permanent place to live.

“It’s a great thing that this is happening today, you know, because everybody’s now moving into shelters or getting an apartment,” Berrios said.