Members of the Rome City School District’s Board of Education, at their last regular meeting of 2021, were trying to come to agreement over priorities for upgrades to district buildings. Among the discussion were plans for redistricting, security improvements to building vestibules as well as enhancements to district athletic facilities.
(Sentinel photo by John Clifford) 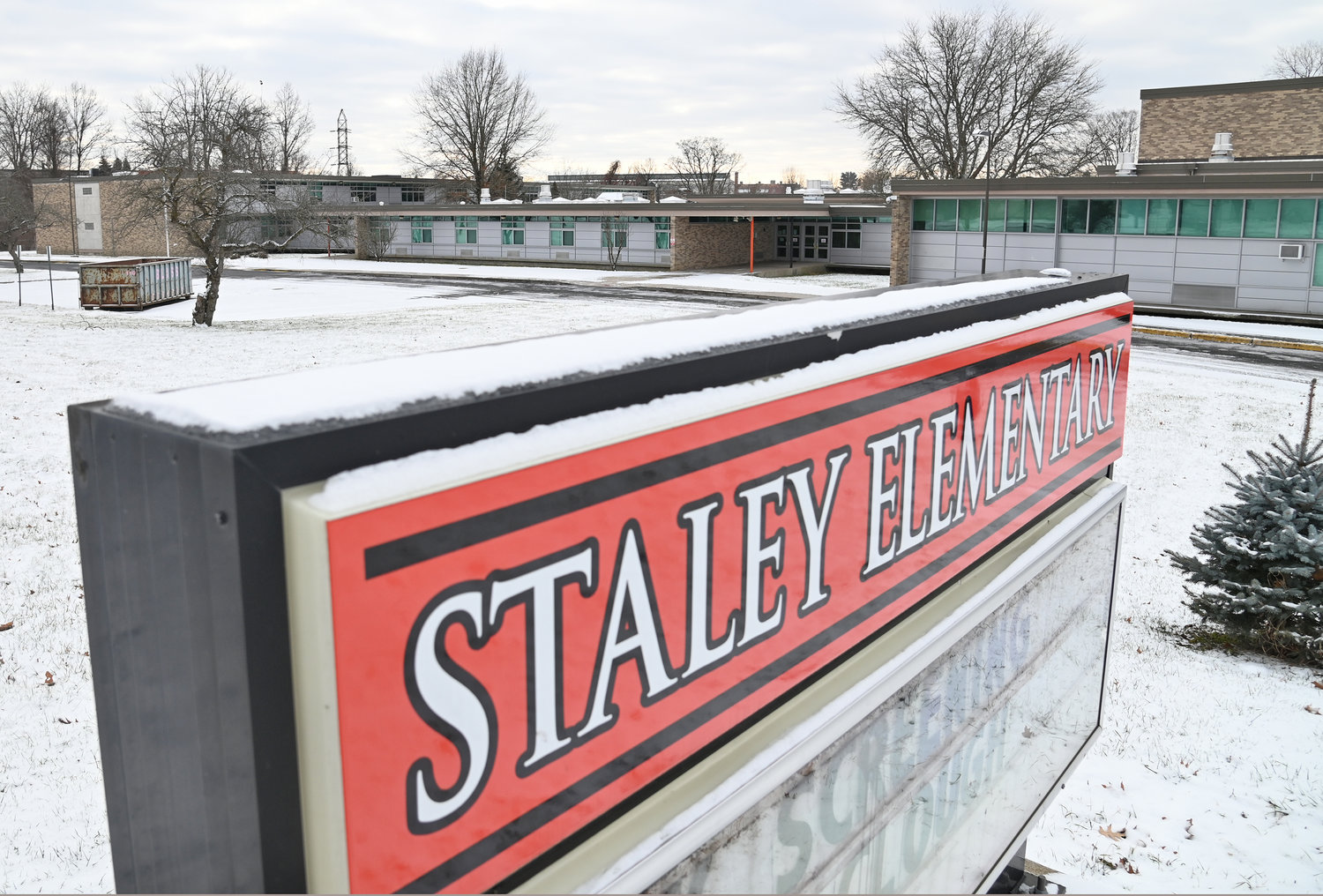 EYING THEIR OPTIONS — Members of the Rome City School District’s Board of Education, at their last regular meeting of 2021, were trying to come to agreement over priorities for upgrades to district buildings. Among the discussion were plans for redistricting, security improvements to building vestibules as well as enhancements to district athletic facilities.
(Sentinel photo by John Clifford) 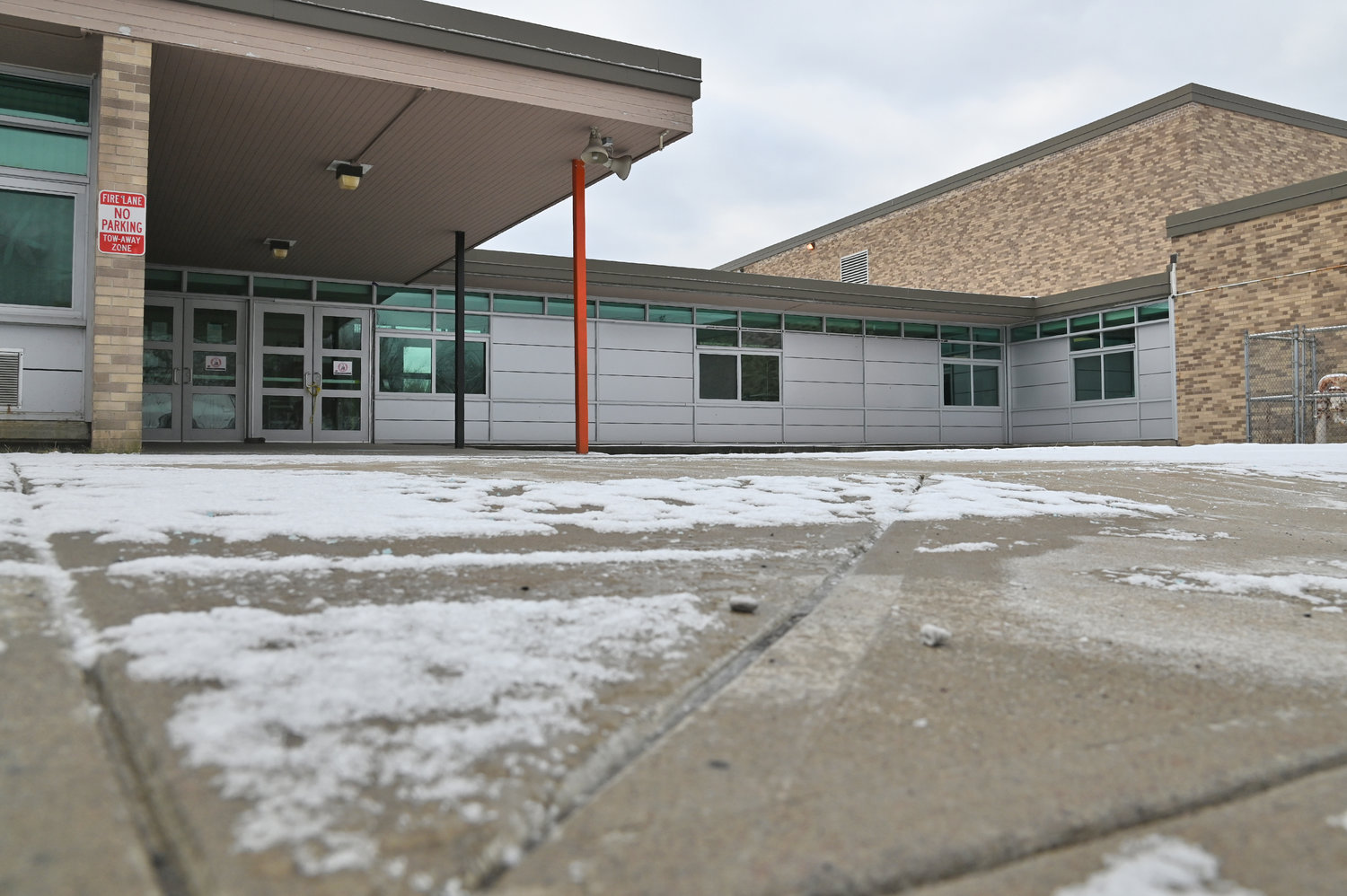 At their last regular meeting in 2021, members of the Rome Board of Education heard from the district’s capital project managers from LaBella Associates, C&S Companies and Fiscal Advisors during the meeting’s work study session regarding the district’s facilities and finances.

Board members were divided over whether to spend significant resources on athletics facilities, school vestibules or redistricting options— with the costs of the various projects being at the forefront of discussions.

In late 2021, consultants provided the district with three redistricting options:

Option 1 suggests “Grade-Banding,” where elementary schools would be paired, with one housing grades K-3 and the other grades 4-6, with Clough remaining pre-K and Strough Middle School continuing its Grade 7-8 structure;

Option 2 suggests converting Clough to a second middle school and adopting a traditional middle school structure of grades 6-8, allowing the moving of pre-K to neighborhood schools; and

Option 3 is an “Attendance Zone” approach that would convert Clough to a pre-K to grade 6 elementary school, support a neighborhood school-based district pre-K program and maintain Strough as a middle school for grades 7-8.

School districts in the State of New York, until recently, were compelled to complete a Building Commission Survey every five years. To alleviate the weight of all the surveys being submitted at the same time, the state recently adopted a staggered schedule. According to it, the Rome City School District – whose last survey was conducted in 2015, will see its next Building Commission Survey due in the 2022-2023 school year, after which the district will return to performing the survey every five years.

For this reason, an interim assessment of basic maintenance and repair needs was conducted by the district’s respective consultants, together with providing options for reimagining the elementary school vestibules to increase security and more strictly control access to the buildings at large.

The LaBella managers advised the Board that all district buildings were being considered for various repairs, with the exceptions of Staley Elementary School and Fort Stanwix Elementary School.

“This report does not in any way address the issues of Staley closing,” said Chris Brewer, assistant superintendent of educational programs. “There will be a subsequent capital project vote in December of 2022.” Brewer noted that it was still too early to provide the Rome community with options or suggestions regarding the future of the Staley Elementary School building.

Suggested repairs, replacements and upgrades across the district’s six operating elementary school buildings included everything from new boilers and hot water heaters to air conditioning units. The managers noted attention needed to valves across several buildings, kitchen maintenance, window replacement, repair of a cracked floor (where the damage is not foundational), the addressing of rust, the replacement of lockers and the addition of smoke alarms.

Discussion quickly moved to security enhancement of school vestibules, particularly following the recent school shooting in Oxford, Mich. with the consultants outlining potential renovations of the vestibules of all six Rome district elementary school buildings — not including the Clough school building — to empower front office staff to quickly secure all access to the school interior from those vestibules in the case of any concern.

“I’m not sold on the vestibule idea,” said board member Anna Megerell, who noted that many situations involve a student who easily enters the school with concealed weapons. “What makes you think this is going to work?,” she asked.

The project managers agreed that, under the circumstances Megerell described and in the absence of metal detectors, the proposed new security would not prevent a current student from entering the school with a concealed weapon. But, they pointed out that, under the circumstances of the current vestibules, immediately sealing off access to the school at large would not be possible.

“From a secure vestibule standpoint, developing a single point of entry and having control of that entry for anyone coming to visit, an angry parent, must present credentials,” the project managers assured. “There will be no direct access from the open vestibule – the way it is now.”

The members expressed concerns over the cost of securing all six vestibules and wondered if it might be possible for office staff to simply be able to automatically lock the main doors, which would be “ a lot cheaper.” Response from the board tracked with having to worry more about students than visitors with regard to security.

“You’d be surprised how often we have adults showing up at our buildings trying to pick up children they are not authorized to take,” responded Rome Superintendent of Schools, Peter Blake. “This allows us that extra blanket.”

“We have conversations with the school secretaries all the time, and they are not comfortable,” said Blake, who reminded members that it is the secretaries who shoulder the responsibility for building access. “You should do everything you can to prevent something rather than roll the dice.”

Blake reminded the Board that this about more than security in case of a catastrophic event.

Davis shared that she has recently seen a high volume of contact from district parents since the Michigan school shooting, seeking to be assured of Rome’s school security.

“A lot of parents are asking about door locks and barricades,” said Board Vice President Tanya Davis.

“We’ve redone every lock in the district over the past three years,” assured Blake, who noted that there is “a lot of stuff out there” regarding door locks if the board wants to explore that.

Blake also noted that new PA notification systems have lighting coding on them to identify the nature of any emergency.

“There have been a lot of advancements,” said Blake regarding the status of the district’s school security.

LaBella’s managers listed target upgrades for the athletic facilities on the Rome Free Academy campus, including a cross country running trail through the district property at the bottom of the hill, resurfacing the existing tennis courts, installing a natural grass football field, turf softball, baseball, soccer and lacrosse fields, parking area for all the above-referenced sports and a set of bleachers to accommodate up to 500 spectators.

Proposed repairs and upgrades for the interior of the RFA building including the replacement of the fire alarm system, the relief of residual leaking around the building, exterior masonry repairs and attention to all flashing and continuing the replacement of the RFA roof, deemed to be in full failure, where just that portion over and around the pool has been completed.

Board member Joe Mellace said the board needs to think about the future of RFA Stadium and the logic in approving a plan for the RFA sports complex that fails to consider the eventual relocation of the football and track facilities to the “new” RFA campus. “There is a lot of nostalgia, and I think that nostalgia has kept us there,” said Mellace about the district’s continued use of RFA Stadium, “but, logistically, it’s still a nightmare.”

Recent Board of Education discussions have delved into the district having hemmed itself into at least a near future with RFA Stadium by investing significant resources into it. “They are not going to let you build a new football stadium at the new RFA site after they just turfed the field at the Turin Road site,” said Blake.

Davis and Board Clerk Dr. Karen Fontana were clearly frustrated with yet another conversation about spending significant resources on RFA Stadium and athletics, in general, following a recent meeting where repairs to the grandstand at RFA Stadium are estimated at between almost half a million and over three quarters of a million dollars. Davis focused on what was absolutely necessary, while Fontana asked the managers if “Option C” could be revised to not include the RFA sports complex at all.

“I just don’t see the great need for it right now,” said Fontana.

Paul Hagerty fell in with fiscal concerns but also aligns with the two officers on an acute advocacy for instructional issues facing the district. “We should know how significant our issues are at our elementary schools before we do this,” said Hagerty of the proposed upgrades and repairs to the district’s athletic facilities.

Hagerty concluded his remarks to say, “It would be great if – in addition to secure vestibules – we were adding rooms to those buildings.”

But Mellace, a proponent of the importance of athletics in defining a district, stood firm. He conceded the importance of the quality of instruction, but asserted that sports facilities are “a draw to the community.” He offered the example of seeing the new sports complex at Vernon-Verona-Sherrill and “was blown away.”

“I don’t see voting for something that doesn’t include the sports complex,” said Mellace, pointing out that RFA teams have been forced to live like “nomads” and that renting space we don’t have and transportation still involve cost.

Board President John Nash added his notice that the RFA baseball team hadn’t been able to use the fields at RFA Stadium of late and put the question to Blake – what was his vision for the future of RFA Stadium? Blake’s response that he sees it ultimately being used for junior varsity and modified sports revealed inherently that he concurs with Mellace that a transition to the RFA sports complex was inevitable.

“We’re trying to provide our athletes with the ability to perform on a field in a stadium that’s top notch,” said Blake, “the best in the region.”

“A lot of taxpayers I talk to have children playing,” said board member Craig Ferretti, “and they’re embarrassed frankly at our facilities.”

Blake brought the conversation to a close to remind members that a decision with regard to the three options presented by the LaBella managers by February 7 or else timelines would be remarkably impacted.

“We, as a Board, have to make that decision,” said Davis, who likened it to “other fiscal decisions” in saying that a priority should be placed on what benefits the most people.