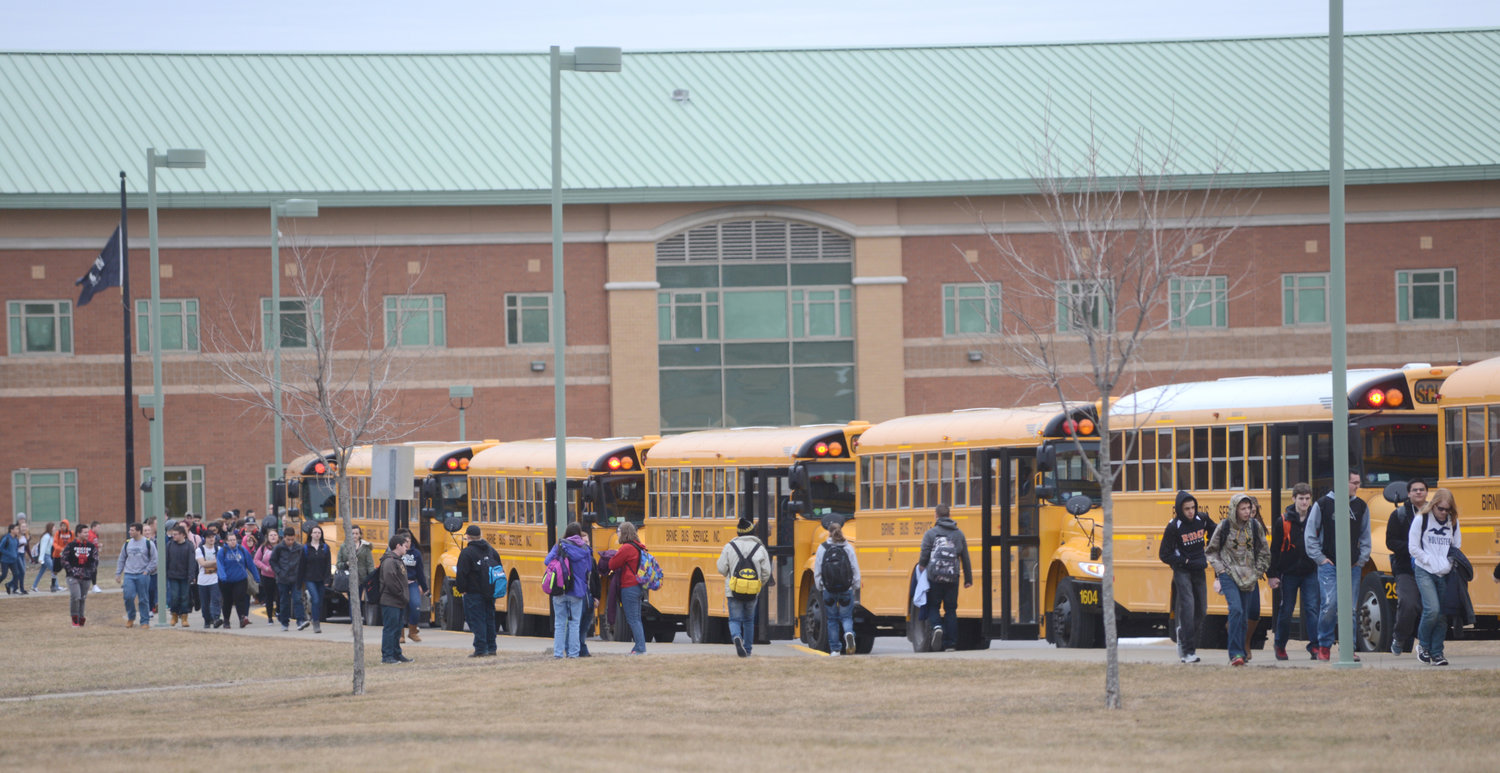 GET COMFORTABLE — Rome Free Academy students walk to their buses after dismissal from school in this file photo. Members of the district’s Board of Education were critical of early pickups and long bus rides during a special meeting on Thursday.
(Sentinel file photo by John Clifford)
Posted Saturday, September 4, 2021 10:00 am
Cara Dolan Berry
Staff writer
email

During a special meeting of the Rome Board of Education on Thursday night, convened solely to consider – and ultimately unanimously carry - a lone resolution on Staley Elementary School, board members picked up on another hot issue — the district’s bus routes for students.

Superintendent Peter C. Blake shared with the board that school bus schedules for the elementary schools were still in progress, pending the final plan for the relocation of Staley students, but that Strough Middle School and Rome Free Academy bus schedules were finalized and available on the district website.

Vice President Tanya Davis raised concerns, prompted by contact from upset parents, that some students had pick-up times before 6 a.m. and those same students had drop-off times close to 4 p.m., with rides in excess of one hour each way.

Davis posed to Blake that she had believed there was a guideline setting a maximum amount of time a student would be on the bus and recalled it was 55 minutes?

“I am not aware of any maximum,” replied Blake.

A former board member clarified being aware of an informal “understanding” with the district’s prior long-time transportation provider, Birnie Bus, that student bus rides would be under an hour, but that no official requirement was ever in place.

Davis repeated reported pick-up times shared with her of 6:03 a.m. and as early as 5:56 a.m.  She pointed out that students riding the bus each way for an hour or more are losing an hour of sleep. “First Student presented themselves as expert in this,” reminded Davis. “It is why we went with them.”

Blake said this year’s situation was similar to what happens at the beginning of every school year. Inevitably, he said, there will be stops planned where a student is not taking the bus to school. Once confirmed, those stops are eliminated and the bus ride for all students, especially those at the first stop for pick up and the last stop for drop off, should be abbreviated.  He noted that the district website — where parents will go to find the bus schedules — implores them to advise the transportation director as soon as possible if their student will not plan to take the bus to school.

The bus schedules currently posted on the district website, the bus schedule for middle school students indeed has buses with first stops as early as 5:47 a.m., 5:53 a.m. and 6:04 a.m., with those same students being the last dropped off at 3:37 p.m., 3:41 p.m. and 3:19 p.m. respectively.  All of these bus rides exceeded an hour, with one morning ride close to an hour and 20 minutes and one afternoon ride on Strough Route 12 timed at 1 hour and 25 minutes.

Davis concluded to ask Blake, “is this what’s best for the kids?”

Board Clerk Dr. Karen Fontana, who is chairing the ad hoc committee convened to coordinate the annual review of the superintendent, reminded the board that she needed one more member and provided a brief overview of the nature of the committee’s work, which includes the review of annual goals set the previous school year and the setting of new goals for the upcoming school year. No member raised their hand in real time, while it was confirmed that new member, Anna Megerell, had agreed to fill the role if no one else volunteered to do so.

Blake advised board members that the district was “95% there” in terms of teacher placement for the school year — with some 5% of teaching positions still vacant or in flux. Blake added he was optimistic that placements in progress would be confirmed in time for school re-opening; which was delayed for a week, to Sept. 13, following the flooding and closure of Staley Elementary School.