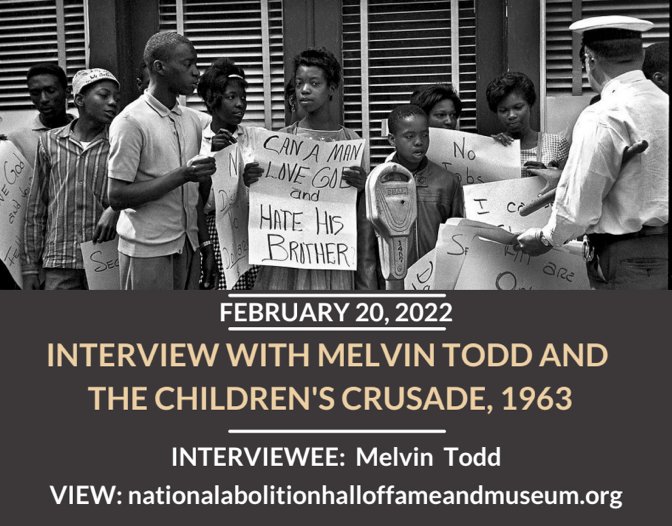 THIRD WEEK — The National Abolition Hall of Fame and Museum Black History Matters 2022 program series continues for its third week beginning Tuesday, Feb. 15. The daily brief “crash courses” in American history for February began with a welcome and an overview by Victoria Basulto, the organizer of the programming, on Feb. 1. The videos are available after mid-night on the dates indicated, and will remain available for at least 11 months.
(Photo submitted)
Posted Saturday, February 12, 2022 3:30 pm

PETERBORO — The National Abolition Hall of Fame and Museum Black History Matters 2022 program series continues for its third week beginning Tuesday, Feb. 15. The daily brief “crash courses” in American history for February began with a welcome and an overview by Victoria Basulto, the organizer of the programming, on Feb. 1.

Basulto described the purpose of Black History Matters 2022 and explained how people can virtually attend the free presentations.

The videos are available after midnight on the dates indicated, and will remain available for at least 11 months.

Black History Matters 2022 is an educational series that seeks to highlight Black American history. NAHOF believes that, by understanding history, the present may be better understood.

The mission of the National Abolition Hall of Fame and Museum is to honor antislavery abolitionists, their work to end slavery, and the legacy of that struggle, and strive to complete the second, and ongoing abolition — the moral conviction to end racism.

These February programs will address key events in our national history and are topics in history that are lesser known or whose implications are not usually understood.

The presenters are volunteer scholars, educators, authors, and researchers who support this project by donating their time and talents.

This program is funded, in part by, Humanities New York with support from the National Endowment for the Humanities. Any view, findings, conclusions or recommendations expressed in this program do not necessarily represent those of the National Endowment for the Humanities. Viewers are encouraged to complete a brief survey for a report to the funder and to guide NAHOF.

Tuesday, Feb. 15 — Interview with Betty B. Bibbins and the Desegregation of Virginia Schools Pt. 2

This is the second part of a two-part interview with Betty B. Bibbins, MD. Dr. Bibbins shares her remarkable life story and illustrates the courageous actions individual children undertook in the desegregation of schools. Bibbins grew up in Portsmouth, Virginia, and attended kindergarten at Sacred Heart School in Norfolk, Our Lady of Victory elementary school, Cradock Jr. High School, and Cradock High School (1964-1969) during the years of desegregation of Virginia’s schools.

As the lone Black student at times, Bibbins experienced the hardships of an educational system and society that resisted desegregation. Bibbins discusses how her family and personal beliefs were often the few things she had to her advantage. She also discusses how her experiences have shaped her life of service thereafter.

In 1951, students at the Robert Russa Moton High School in Farmville, Virginia, walked out of school to initiate a strike demanding better school facilities. Led by 16-year-old Barbara Johns, the Moton Student Strike would produce three-fourths of the plaintiffs in Brown v. Board of Education (1954) and would be the only student-led initiated case of the five that comprised Brown v. Board. The Moton school story is also vital in the Supreme Court case of Griffin v. County School Board of Prince Edward County, which intervened to reopen schools in the county. The R.R. Moton High School, located in Prince Edward County, had been closed for five years (1959-1964) alongside other schools as the county closed down schools rather than desegregate after the Brown v. Board decision.

Today, the R.R. Moton High School is a National Historic Landmark and a museum. In this interview, we hear from the director, Cameron Patterson, about the history of the museum and school.

Jefferey McArn, the chaplain at Hamilton College, introduces us to Robert Parris Moses. Moses is an alum from Hamilton College and was a renowned civil rights activist. In this remarkable two-part series retelling of his life, we learn of Moses’ courageous involvement with the Student Nonviolent Coordinating Committee, his efforts to register voters in Mississippi, and the many causes he championed in his life.

In this presentation, McArn presents an extensive collection of interviews to capture the remarkable life of Robert Parris Moses.

In part 2, Jefferey McArn, the chaplain at Hamilton College, continues his presentation on Robert Parris Moses.

On May 2, 1963, hundreds of students skipped classes and marched to downtown Birmingham, Alabama. The students were arrested and taken to jail in droves. The following day, as more students gathered peacefully, they were met with violence by the police and images of children being hit by police clubs, bitten by police dogs, and blasted by high-pressure firehose shocked the world. This presentation by Victoria Basulto is an introduction to that story. This presentation will reinforce the following presentation on Feb. 20 when we will hear from Melvin Todd who participated in the marches as a child.

Sunday, Feb. 20 — Interview with Melvin Todd and the Children’s Crusade, 1963

In 1963 Melvin Todd was a high school student at Western Olin High School in Birmingham, Alabama. In this interview, he recounts the story of his participation in the Children’s Crusade, what he saw, and the sensation of living in a moment of great cultural and political change.

In 1967 the Supreme Court Case of Loving v. Virginia ended the right of states to ban interracial marriages and decided anti-miscegenation laws were unconstitutional under the 14th amendment. In this presentation, Victoria Basulto will tell the stories of the two plaintiffs, Mildred Jeter who was Black and Richard Loving who was white. Married in Washington D.C. the couple was charged with violating Virginia’s anti-miscegenation laws upon returning to Virginia. This is the story of their journey to the Supreme Court and the impact the decision had on the rest of the nation.