A little peace from the ruins of Woodstock ’99

As we have been recently reminded by the Netflix documentary — “Trainwreck: Woodstock ’99” was anything but “3 Days of Peace and Music” like people insist the original Woodstock (’69) …

A little peace from the ruins of Woodstock ’99 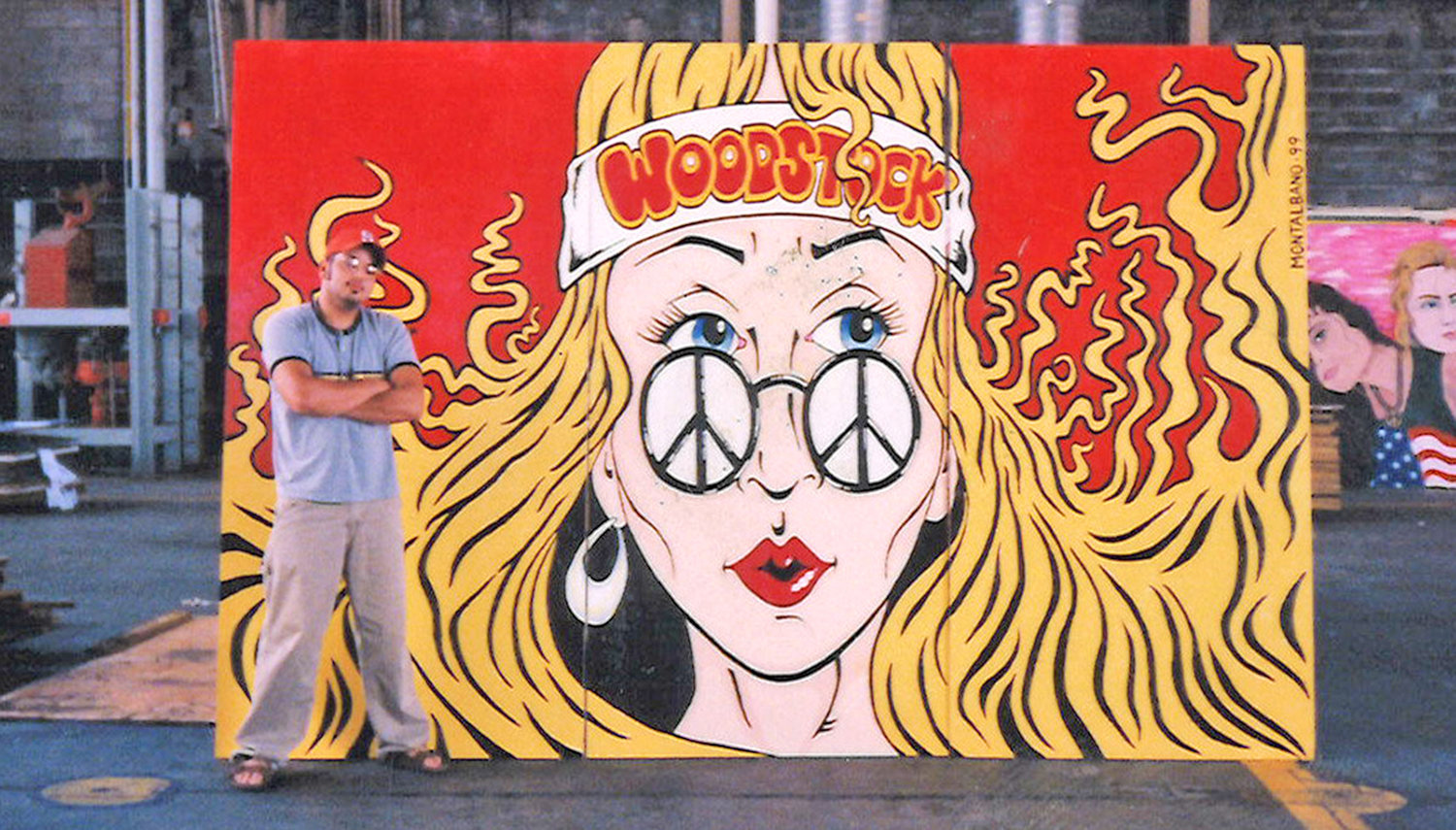 Artist Mark Montalbano with the Woodstock Girl panel he was asked to recreate after the festival because the original piece was destroyed.
(Photo courtesy Mark Montalbano) 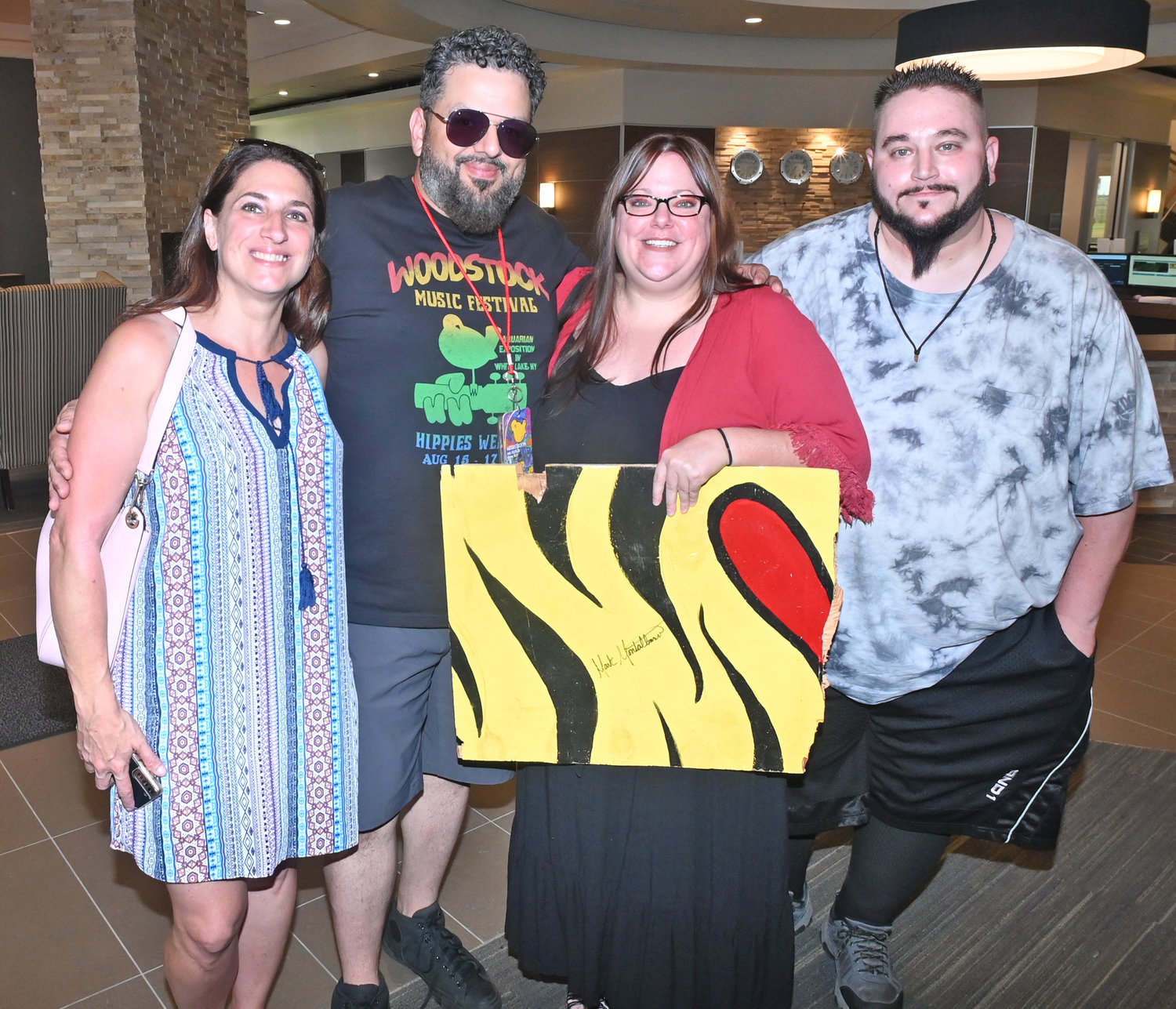 New friends, from left, Jennifer and Mark Montalbano, Maren Ondriska and Adam Hallenbeck with the hunk of painted plywood that brought the new friends together 23 years after Woodstock ‘99.
(Sentinel photo by John Clifford) 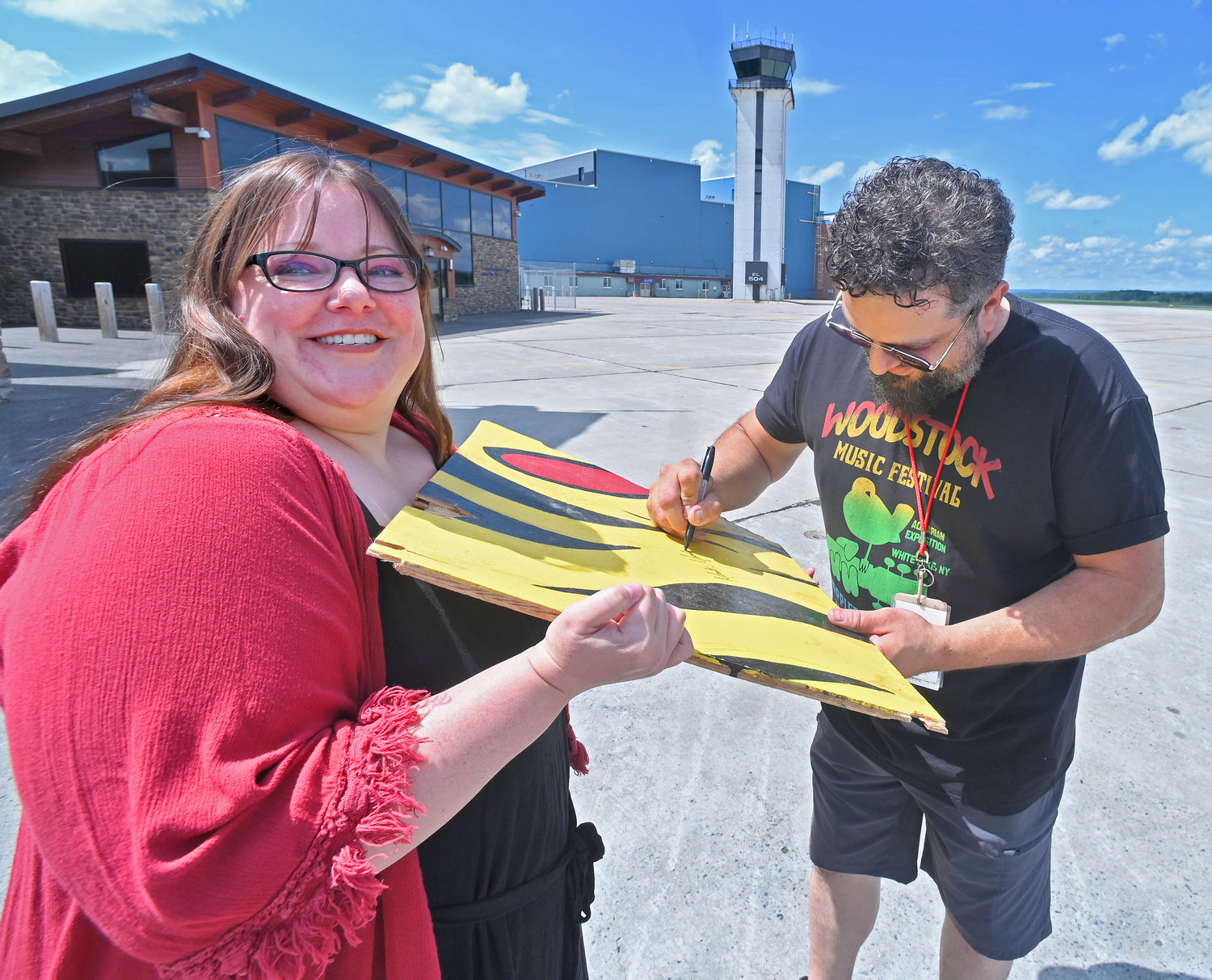 Maren Ondriska from Johnstown with Rome artist Mark Montalbano as he signs the 2x2 foot piece of Woodstock Girl he had painted 23 years ago for the Woodstock '99 music festival and was destroyed by concert goers along with all the other art that was created for the festival.
(Sentinel photo by John Clifford)
Previous Next
Posted Wednesday, August 24, 2022 4:50 pm
John Clifford
Photographer
email

As we have been recently reminded by the Netflix documentary — “Trainwreck: Woodstock ’99” was anything but “3 Days of Peace and Music” like people insist the original Woodstock (’69) was. Instead, Woodstock ’99 was more debauchery and greed, with a lot of hard music that reflected the mood of the late 90s.

However, there was artist Mark Montalbano of Rome, who took the spirit of 30 years earlier and, through his vision and art, almost single-handedly brought some of the “flower power” — peace-concept to long stretches of 4x8 sheets of plywood.

For the Peace Wall, Montalbano took time off from his work at the city of Rome’s Department of Public Works to devote three months to preparing long expanses of his unique gift of art. This was a “fence” that was designed to keep people without tickets out of the Griffiss concert venue. The plywood that was erected had beautiful original art painted on the panels.

Montalbano was responsible for about a half mile of the panels that stretched around the expansive Griffiss grounds.

“I would drop Mark off at 7:30 in the morning (at the hangar where the art was being made),” stated Jennifer Montalbano, Mark’s wife. “Come home at 5, pick him up to go home and he’d get something to eat and then he would go back and work until midnight. He was putting in 18-hour days sometimes.”

“I had one kid helping me, bringing me supplies and stuff,” stated Montalbano, who was
27-years-old at the time.

Like a mama (papa) bear, Montalbano protected his cherished work and “wouldn’t let anyone else touch my stuff,” working virtually non-stop for three months to bring the blank panels to life.

Montalbano was in heaven.

“I loved it and I was getting paid to do it (make art),” said Montalbano. “All these artists, celebrities, and MTV personalities are walking in and out (of the hangar/studio).”

One of the pieces of art Montalbano painted, Woodstock Girl, caught everyone’s attention.

“They (Michael Lang and other high-profile organizers) did make a big deal about Woodstock Girl,” stated Montalbano. “Once they saw it they were thinking about making it the focal point and having it go over the entrance, and I was like, really! They were really in love with that piece.”

Montalbano studied art at Mohawk Valley Community College and is a 1990 graduate of Rome Free Academy, where he credits teachers Judy Mullin and Jane Taylor with encouraging his art.

When the announcement of Woodstock ’99 came along, Montalbano saw an opportunity, applied, and was interviewed by Steve Rainford, who was the guitar tech for the Edge of the band U2 prior to his Woodstock ’99 involvement. Hired — Montalbano began his work.

After three months of creating art in the hangar, 250,000 people, hoping to feel the spirit of music 30 years prior, came to Woodstock ’99. All the art was in place to greet concertgoers and propel the good will, reflecting the spirit of Woodstock’s past and connecting to the present.This is the point where the feel-good story about a gifted artist making art for the three-day Woodstock music fest literally went up in smoke Sunday evening, well before the Red Hot Chili Peppers finished their encore — “Fire.”

The mood of the venue changed drastically during most of Saturday, and by Sunday morning, the pristine grounds of Griffiss were littered with plastic bottles, pizza boxes, and enough garbage to fill up a landfill. Concertgoers started leaving in droves. They had had enough of being gouged by festival prices and poor infrastructure that resulted in major sanitary issues and access to drinking water. And they just wanted to go home.

But before leaving, some of them started destroying everything in sight, and one of the first casualties was the Peace Wall.

The art was ripped down and somehow cut up into pieces.

This is when 19-year-old Maren Ondriska of Johnstown was leaving the venue and secured a piece of the wall.

“I saw everyone else doing it, so I just grabbed a piece too,” said Ondriska, now a Fulton County caseworker.

Fast forward 23 years. Ondriska and her boyfriend, Adam Hallenbeck, wanted to “find the artist” and see what the hunk of painted plywood was part of.

They talked, and Ondriska decided she needed to have Montalbano sign the piece they had.

On a blazing hot summer day, similar to the festival 23 years earlier, Ondriska and Hallenbeck traveled to Rome and met up with Montalbano for the artist to sign the piece of Woodstock Girl at the “scene of the crime” – on the ramp at Griffiss International Airport.

For Montalbano, “this is a feel-good story and a new friendship.”

However, he admits he and the other artists were “upset” with what happened to the art. The entire Woodstock Girl piece is gone, probably cut up like the piece that Ondriska acquired. Montalbano doesn’t know if any of the art remains.

Montalbano still works at the City of Rome DPW. He and Jennifer married in 2001 and have two children, Mila, 18 and Marco, 15.

Twenty-three years after the festival, Montalbano graciously extended himself to welcome his new friends who had a piece of his art. Woodstock ’99 may have ended up in a fiery garbage dump, but Montalbano made sure this little artifact would retain some of the spirit of the original festival 53 years ago.